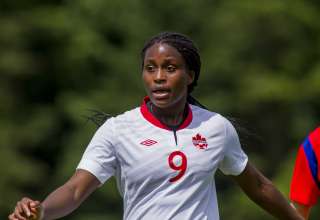 At the 15-minute mark, the Canadian team got bad news — and a bad omen. Striker Nichelle Prince had to leave Saturday’s U-20 Women’s World Cup quarter-final due to injury.

And, facing the tournament-favourite Germans in front of more than 22,000 fans at Edmonton’s Commonwealth Stadium, the Canadians lost their top central striking option.

Canada would go on to lose 2-0; but the home side did create plenty of chances that result in scuffed shots, tame efforts right at the keeper, or headers over the bar. In terms of possession and territorial play, the Canadians matched the Germans. But, where the Germans took advantage of their opportunities, Canadians scoring chances went begging.

And Prince had to sit on the bench to watch most of the game.

“We’ve all seen how big she was for us and how important she is, the energy she brings and the goal threat that she bring, ” said Canadian coach Andrew Olivieri. “It was difficult, but it was something we had to move on with and it was unfortunate. It’s a bit unlucky that three, four minutes into a game that one of your players can’t go anymore. She was clear that she couldn’t push through it. I couldn’t tell you if it was a quad or a hamstring.”

Prince went off just after teammate Emma Fletcher had her long-distance effort go off the bar.

Prince had to watch as Germany’s Pauline Bremer got behind the Canadian defence, was able to round keeper Kailen Sheridan, and then smash the ball into the goal despite central defender Kadeisha Buchanan’s furious effort to get onto the goal line and stop the effort.

“It was a little bit of miscommunication from our defenders,” said Olivieri. “My understanding was that it was actually offside, but I didn’t see it, so I couldn’t tell you. Unfortunate; I think there were a couple of little errors on that play. You have to be safe and clean and keep things tight at the back for 90 minutes. One little mistake, whether it was offside or not, we have to make sure that doesn’t happen.”

Canadian goalie Sheridan kept her team in the game just after halftime, stopping Bremer on a point-blank chance after a clever three-way passing play. But, as the game went on and the Canadians couldn’t turn their possession into a golden chance, the Germans were always going to be dangerous.

“I want to specifically praise my inner defence,” she said through a translator. “It was fast-paced game, and most of the chances Canada had came from the outside, so the defence did a very good job today.”

And, of course, Canada losing its main central striking threat played a role in that, as well.

As the game was stretched, the Germans were eventually going to get a chance at that second goal. And it finally came in the 82nd minute, with Rebecca Knaak winning a battle in the air for a corner and heading home.

Substitute Amandine Pierre-Louis had a golden chance to get Canada to within a goal right after Knaak had scored, but she pulled an effort just wide when she had German keeper Meike Kaemper at her mercy.

As the first half went on, the crowd kept building, as transit issues kept people from getting to the stadium in time. Even at halftime, there were still fans streaming into Commonwealth Stadium. Most of the lower bowl was full.