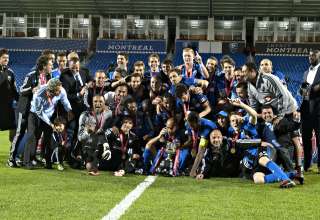 Like so many TV series that don’t really know how to end on a high note, the final impression of this year’s tournament to determine Canada’s soccer champion will be remembered as the denouement, not the climax.

Montreal won Wednesday’s second leg of the final 1-0 at home, giving itself a 2-1 aggregate triumph over Toronto FC. The goal, from Felipe, came off a rebound from a Marco Di Vaio shot that had crashed off the crossbar. The goal came at the death, as TFC was pushing men forward, playing four natural attackers, in hopes of erasing that Impact away goal from the first leg.

But, despite TFC’s heavy artillery up front, finishing the game with Jermaine Defoe, Luke Moore, Gilberto and Dwayne De Rosario looking to score, the Reds rarely looked like they wanted to score. The real story was that it took 82 minutes for the match to come to life. TFC’s Jonathan Osorio cut across Impact defender Karl Ouimette, and lashed a low shot across keeper Evan Bush. The ball came off the post.

For most of the game, we saw rope-a-dope from two sides. Toronto FC created very little in terms of real scoring chances, while the Impact was happy to simply nullify TFC. Yes, the Reds did have some incursions into the final third, but they were regularly undone by poor passes. Alvaro Rey showed time and time again a propensity to get up the wing, do well to beat a couple of defenders — and then deliver a poor final ball.

Really, the biggest incident of the first half came when a volley from Impact forward Jack McInerney struck the outstretched arm of Toronto FC defender Doneil Henry, but referee Dave Gantar decided not to point to the spot. After the penalty controversies of the Montreal-FC Edmonton semifinal, you got the feeling that referees in the final two legs would have a hard time pointing to the spot. So, while some Impact fans may have been frustrated, they couldn’t have been surprised.

And, in a game that Toronto had to chase, most of the second half looked like an exercise between two teams who didn’t want to win. It was dull, listless — and not even the most hardcore Canadian soccer supporter could be faulted for flipping to see what was happening in the Stanley Cup final or checking to see if the Blue Jays’ hot streak would continue.

For a tournament that has historically given us bizarre endings, this finale was shockingly pedestrian. And it certainly didn’t live up to the promise of the semifinals, with TFC’s nail-biting triumph over Vancouver, and Montreal’s last-second win over Edmonton. Really, the Montreal-FC Edmonton semifinal was the most remarkable two-legged series the Voyageurs’ Cup has seen in its short history — and it’s those two matches which will provide us with the most memorable moments of this 2014 tournament.

Personally, I prefer single-game Cup finals over two-game aggregate series. I feel that, over two legs, teams will choose to be cagey rather than ambitious, whereas a one-game final forces both sides to think more about winning rather than playing not to lose. But the ACC, historically, has done well to deliver some engaging second legs. Until Wednesday. This was one of those quagmire games that wasn’t easy to watch — and would add fuel to the fire for those who support going to a one-game winner-take-all Cup final.

Soccer’s a funny game. Montreal was seconds away from being eliminated by an NASL team in the semifinals; now, the Impact will have a CONCACAF Champions League campaign to help soothe the pain of what is looking to be a painful MLS season.

But Toronto, despite having played the fewest games of any MLS team, looked like a tired squad. TFC was flat, which is what often happens to team who are only slightly removed from rousing comeback victories. TFC scored two late goals to beat Columbus 3-2 on Saturday; and, as we so often see, the team that has a great rally often comes out very flat the next time out.

Impact fans can savour the defence of the Voyageurs Cup. But I’m sure they’ll forgive soccer fans across Canada if we all try to forget the anticlimactic match that got Montreal the title.