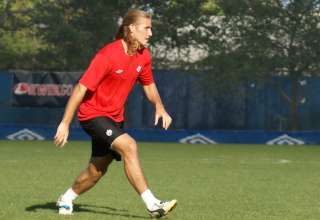 Canadian midfielder Mozzi Gyorio is suing Minnesota United and the North American Soccer League. The Prince Edward Island-raised Gyorio claims the team breached the terms of the contract, and that the league allowed it to happen.

Gyorio signed with the USL’s Austin Aztex in 2015, after he was released by Minnesota United in 2014. He previously was a regular starter for the NASL’s FC Tampa Bay franchise (now known as the Rowdies) and was also at English lower-division side, Fleetwood Town. Before going to England, he turned down an MLS entry-contract offer from Sporting Kansas City.

In a statement of claim (CLICK HERE TO VIEW IT) filed with the Manhattan Supreme Court, Gyorio’s legal team alleges that he made the decision to move to the United States in 2014 to join the club, was allocated one of the team’s seven international roster slots — and then was later instructed to join Minnesota United’s reserve team in the NPSL. He claims that being loaned out to a reserve team was not part of his contract .

Gyorio claims that he was told to go to the reserve side because Minnesota made a signing in May that put them over the number of internationals an NASL team is allowed to have. (Unlike USL, in NASL, Canadian players are not considered domestics on the rosters of U.S.-based teams.) Gyorio refused.

When that signing was made, Gyorio claims that the team asked him to move to the reserves “notwithstanding the fact that Gyorio did not sign a loan agreement and the contract did not specify any reserve or possibility of loan to an affiliate team.”

Also in the statement of claim, Gyorio says that he did not want to move to NPSL because it is “amateur” and “unsanctioned.”

After his refusal to go down to NPSL, Gyorio says the team circulated a new policy that asked players to comply with “reasonable operational requests” and that any failure to do so could be seen as a breach of contract.

Gyorio sent a letter of complaint to NASL Commissioner Bill Peterson. According to the statement of claim, “the League issued a response stating that it found no harm in the assignment of the contract to the reserve team, stating in fact it was a more formal approach of utilizing a reserve team that is commonly employed by professional soccer clubs both in the United States and around the world.”

In the statement of claim, John P. Kaplan, Gyorio’s lawyer, says that the NASL’s response was “completely arbitrary and without a legal basis.”

The league agreed that Minnesota could terminate Gyorio’s contract.

Gyorio’s claim alleges that the contract was terminated in August of 2014. He is suing to be paid out what is owing on his contract. None of the allegations made by Gyorio or his lawyer have yet been proven in a court of law.

Minnesota United is still seeking a stadium deal, but has been provisionally accepted as an MLS expansion team.