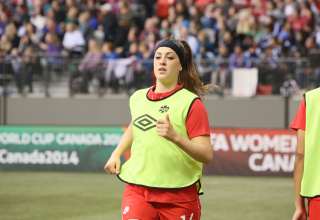 (The first issue of Plastic Pitch features an in-depth look at Selenia Iacchelli’s journey through injuries and adversity, and finally to a debut with the Canadian women’s national team and an NWSL allocation at the age of 27. We follow it up with this update)

When the NWSL season starts this Sunday, 15 Canadians will be on team rosters across the nine-franchise league. Fourteen of them will come from the 2014 roster spots the Canadian Soccer Association.

Those 14 will be joined by Nkem Ezurike, who was taken in the draft by the Boston Breakers. But, Canada has 16 allocations, not 14. Why did the number shrink? Earlier this offseason, midfielder Desiree Scott announced her intention to move to England’s Notts County — and after weeks of waiting, the move finally went through. After the move was made, Canadian women’s team coach John Herdman chose not to fill Scott’s allocation spot, saying there wasn’t another unattached member of the national program who would merit it. (CLICK HERE)

And now there’s bad news on the injury front.

That comes from 27-year-old midfielder Selenia Iacchelli — the former University of Nebraska captain who overcame a series of injuries to work her way back into the senior national-team picture.

Iacchelli has played professionally in Italy with Torres, and had been offered a contract by Doncaster Rovers, but that deal was scuttled because she broke her arm in an Edmonton indoor game.

After making her debut with the senior national team late last year, she was granted an NWSL allocation in January of 2014. But yet another injury — following two foot breaks and that broken arm that put her career on hold — has set her back again. A serious knee injury has made her allocation spot null and void.

So that’s two allocation spots that will go unused in 2014.

Iacchelli informed The 11 that her patellar tear is better, but not healed. She needs another month or two off rehab and the Western New York Flash simply couldn’t wait for her.

Iacchelli will return to Vancouver, where she owns a food-truck business with Canadian national defender Emily Zurrer. When she heals, Iacchelli says she will be “going overseas to play, most likely in England.”

But Iacchelli says she understand the bind that the Flash was in.

“The team is sad as well as the coach but, you know, the knee just wasn’t quite ready yet.”

Canadian defender Lauren Sesselmann is expected to miss most of the NWSL campaign with a knee injury.