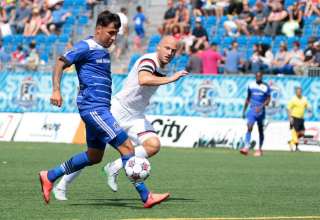 The defensive issues that plagued FC Edmonton throughout the NASL spring season returned for the team’s first fall-season game at Clarke Field.

A series of defensive mistakes gifted the visiting Atlanta Silverbacks a 3-1 win. The Eddies, who had been undefeated in the fall season through three road games and a “home” match in Fort McMurray, were victimized throughout the second half, with defenders getting caught out of position and/or being too casual on the ball.

“The defending was a calamity,” said FCE coach Colin Miller after the match. “We didn’t give ourselves a chance.”

The big winner on the day was the Ottawa Fury, who got a last-gasp goal from Carl Haworth to beat the Carolina RailHawks, 2-1. The Fury now enjoy a five-point cushion on second-place FC Edmonton in the NASL fall standings.

After a scoreless first half in front of an announced crowed of 4,232, Atlanta stunned the fans early in the second. Pedro Mendes barged into the box and managed to barge the much larger Mallan Roberts out of his way. After beating the FCE defender one-on-one, his shot beat keeper Matt Van Oekel at the near post. The shot came off the frame, but ricocheted right into the path of Atlanta forward Jaime Chavez, who was alone in front of goal and enjoyed what has to be easiest finish of his career.

The Eddies kept on giving; right after the Eddies subbed in striker Tomi Ameobi for his first action since May, the home side was once again picking the ball out of its own net. The entire back line got caught flat-footed on a header that was flicked over their heads. Chavez ran onto it and, while the defenders were looking to the linesman for an offside flag, the forward calmly placed the ball into the corner of the net. Replays showed that not only was the play onside, it actually wasn’t close.

With Atlanta well in control, the game did take an interesting turn when sub Michael Mravec was sent off for a late tackle on Eddies’ fullback Eddie Edward. Atlanta coach Gary Smith was up and out of his box when the card was shown; and, while the challenge was late, it was hard to see it as high boot or a tackle that endangered the safety of the opponent.

But, it took the Eddies until the 85th minute to make it count, Centre back Albert Watson, playing up in the attack, snuck a ball into the box for Ameobi, whose low drive found the back of the net.

The Eddies had a glimmer of hope; the Silverbacks had played in Ottawa on Wednesday and were dealing with fatigue.

“They were dead on their feet,” said Miller. “That goal took the wind out of our sails.”

Smith said he felt the Silverbacks deserved a better fate on Wednesday, when they lost 2-1 to Ottawa. And he said he saw more positive signs from his team on Sunday, which he acknowledged must overcome “budgetary challenges” to compete with the rest of the NASL.

The Silverbacks didn’t launch a threatening shot on goal in the first half; meanwhile the Eddies had a couple of decent chances. Atlanta keeper Steward Ceus palmed a wicked drive from FCE midfielder Cristian Raudales over the bar. And, starting striker Frank Jonke was played in behind the Atlanta defence thanks to a great pass from Thiago de Freitas. But Jonke showed too much of the ball to Ceus as he tried to round the keeper, and the Haitian swatted the ball away.

BOAKAI’S BAN
Hanson Boakai, who returned to the squad this week after a run in the Canadian team at the Pan Am Games, was suspended for the Atlanta game by Miller. Boakai showed up 20 minutes late for Saturday’s FCE team meeting.  Unfortunately, Boakai has had problems in the past when it comes to showing up on time for games and training sessions.

Instead of keeping the suspension internal, Miller spoke about it publicly on the FC Edmonton pre-game broadcast. It’s clear he no longer wants to be subjected to the “why isn’t Hanson Boakai playing?” questions without the proper context.

“I have a whole club here, I’m not a babysitter,” said Miller. He said it would send a poor message to the team if he allowed Boakai to “get away with” being late.

WOODALL CUP
Hours before the FC Edmonton match, about 1,000 people gathered at Clarke Stadium for the Woodall Cup. The game was a memorial for Const. Daniel Woodall, who has killed in the line of duty earlier this year. Woodall came to Canada from England, and was a lifelong Arsenal fan.

Members of the British Select team wore yellow Arsenal FA Cup replica kits that were donated by the London club. They took on the EPS Blues, a team made up of Edmonton police officers.

Proceeds from the game went to Woodall’s family. His wife, Claire and their two young sons, Gabe and Callen, spoke to the crowd before the kickoff of the game.

“The last few weeks have been the most heart-wrenching of my life,” she said. But she thanked the fans in attendance and Edmonton as a whole for being so supportive for her and her family.

“There’s been so much love for myself and my family, I can’t thank you enough,” she said.

Saying the day was “bittersweet” for her and her family, Claire Woodall soaked in a minute of applause for the late constable, as streamers were tossed from Clarke’s main stand.