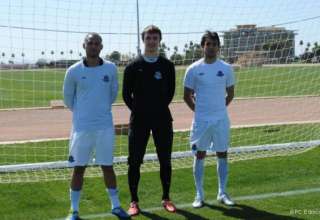 Four days before the team is supposed to gather in Sunrise, Fla. for a pre-Olympic qualifying camp, the Canadian Soccer Association has officially announced the 23-player roster.

Some players were contacted more than a month ago by team manager Morgan Quarry, but the CSA later said that those names were just meant for a preliminary list that needed to go off to CONCACAF.

But, all of the players who had initially confirmed that they would be on the roster — including Huddersfield Town keeper Simon Thomas, Toronto FC’s Matt Stinson and the FC Edmonton trio of Michal Misiewicz, Shaun Saiko and Kyle Porter — are included in the group of 23.

Canada will conduct its camp March 13-20, which also includes a friendly against Trinidad and Tobago. The CONCACAF Olympic qualifying tournament begins March 22 in Nashville. The deadline for Canada to declare its final comes 48 hours before its first match.

Bryce Alderson, two-time Canadian U-17 player of the year, is still completing his Grade 12 correspondence courses. He will be one of the youngest kids on the team. Unlike some of the others, who have been waiting for over a month, he didn’t get the call from Quarry until a couple of weeks ago.

“It sort of came at the last-minute,” he said. “Any time you get to put in the jersey, it’s an honour.”

He will be united with Whitecaps teammate and fellow Generation Adidas player Russell Teibert, who also got the call.

FC Edmonton’s players are looking forward to the camp. The players will leave FCE’s training camp in Arizona for Florida.

“I’ve got a lot of confidence right now so hopefully that will help me at the (Canada) camp,” Porter said via the club. “I want to be on the team. I want to be a star on the team, and I want to make it to London.”

“It’s been a while since my last call up but obviously I played well last season so this means a lot. It’s a proud moment that’s for sure,” Saiko said. “It’s nice that people know about FC Edmonton now and that goes to show that we are doing the right things.”