January 31, 2023
9 New Articles
Home MLS Montreal Impact Impact played cautiously in Philadelphia, but that was the game plan going in 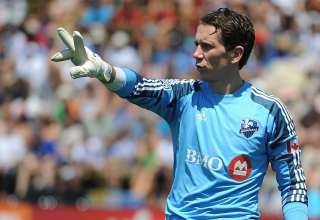 The good news for the Montreal Impact is it salvaged an 0-0 draw here with the Philadelphia Union, despite being outplayed most of the night and managing just four shots on goal.

The bad news — part of which Impact star Marco Di Vaio and his teammates witnessed on the big screen in the locker room when D.C. United failed to convert a penalty kick — was the New York Red Bulls’ 2-1 win pulls them even in the Eastern Conference standings with Montreal at 42 points. Later in the night both of them were joined by Sporting Kansas City, which won in Colorado.

Of course, the Impact still has those potentially crucial two games in hand over New York and some of the other clubs chasing them, though the players would rather not think that far ahead,

“I think when you start worrying about where you’re at you make it a lot more difficult for yourself,” said Impact goalkeeper Troy Perkins, who made four saves — a couple of them from point blank range — to preserve that valuable point on the road. “You put pressure on yourself and forget about playing.

“We just need to keep our concentration and focus on what we’re trying to accomplish.”

What the Impact is trying to accomplish in just its second season in the MLS would indeed be special. But with still nine games to the finish line the players are reluctant to look at the big picture.

“It would be huge,” admitted Justin Mapp, who was credited with the only shot Philadelphia keeper Zac MacMath had to stop, as 12-7-6 Montreal maintained its tenuous hold on first place. “We didn’t make the playoffs last year, so to make a big step like that would mean a lot to our club, our fans and the city of Montreal.

“We’ll fight to very end and see what happens. We’re in a good spot right now, but we want to keep going.”

Perhaps it was simply a matter of the Impact playing cautiously on the road against a 10-8-9 Union team that would’ve caught it in the standings with a win. But, clearly, Philadelphia was the aggressor in this one, controlling play the better part of the night, while the Impact was content to lay back in a defensive shell and wait for an opening.

It nearly got one in the 61st minute, when Di Vaio found the back of the net, only to have to nullified for being offside, which replays confirmed. Otherwise, Montreal did little offensively, which assistant coach Mauro Biello — again filling in for the suspended Marco Schallibaum — said was pretty much the game plan.

“The last five road games we’ve given up goals, so we wanted to come back and secure (the) back line,” said Biello, who once played for the Impact. “Give credit to the players. They held their shape.

“In the second other than the shot from (Jack) McInerney (which Perkins dove to block with his leg) they didn’t have much.

“They gave up five goals in their last game (a 5-1 loss in New England), so I’m sure their coach (John Hackworth) said defence was important to them. They didn’t give much space to Marco or Felipe (Martins).
They did a good job. It was hard for us to penetrate and get behind.

“But the result in the end is we come out of here with a point.”

Really, that’s all that matters, as the Impact — with nine games left to seven apiece for New York and Sporting Kansas City, technically still holds the top spot.

“Those two games in hand don’t mean anything until you accumulate points,” reminded Biello, with the Impact next facing surging New England on the road. “Now every game is important.

“Our objective is to get into the playoffs. We’re not there yet. Having those two games doesn’t mean anything until you win or get points.”

On the other hand, it still has to make it the team to beat in the East.