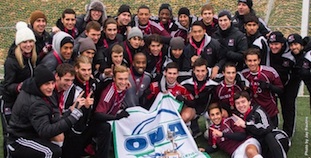 After a weekend of shocks, we have the final eight for both the men’s and women’s national championships.

And the biggest stunner of all? That York, undefeated through the OUA regular season and the No. 1-ranked men’s program in the country, will not be heading to Quebec City.

York found the worst time possible to lose its first game of the season. After 115 minutes of scoreless soccer, Carleton’s Joey Kewin tapped in a low cross to give the Ravens a stunning 1-0 win over York in the OUA semifinal.

Only the Ontario finalists qualify for the nationals, so York went from No. 1 to out of the playoff picture. With York gone, No. 2 ranked and Canada West champion UBC (CLICK HERE for our recap of the Canada West final) becomes the favourite to take the men’s crown.

Carleton had nothing left in the tank for the OUA final on Sunday against McMaster. The Marauders won the provincial title easily, a 5-0 romp. Paterson Farrell and Mark Reilly scored first-half goals. Muntazir Fadhel scored a second-half penalty, and Karl Bicamumpaka and David Serafini added the insult-to-injury markers.

In the East, No. 7 St.Mary’s — who fell in the national final to Victoria last season and was widely expected to make a return to the big dance, fell in an AUS semifinal stunner. After 120 minutes of scoreless play, Cape Breton took the penalty shootout, 3-2.

Ian Greedy and Bruno Mota scored for the the Capers in the AUS final, as the islanders beat New Brunswick by a 2-0 count. But both the Capers and Reds qualify for nationals, while the Huskies, like York, have to wonder what could have been.

Laval, as hosts, grab an automatic spot for the nationals. That meant Quebec would get just one more spot in nationals, and it was claimed by UQTR. The Patriotes beat Laval in penalties after the game finished tied 1-1 after 120 minutes. Because Laval was the opponent, UQTR went into the final knowing it would also be in the final eight.

WOMEN:
While the previously-undefeated No. 1 team fell on the men’s side, the undefeated and No. 1-ranked Ottawa Gee Gees are going to the national women’s finals in style.

Ottawa claimed the OUA championship with a 1-0 win over Laurier. Both the Gee Gees and Hawks will be heading to Victoria this week.

In extra time, Ottawa forward Pilar Khoury outleapt Laurier keeper Katrina Ward for an awkward bouncing ball in the penalty area. Khoury nodded the ball in to the goal to keep the Gee Gees undefeated season alive — and make them the national-title favourites in Victoria.

As host, Victoria is in; the Vikes also made it to the Canada West final, which then ensured that its opponent, Trinity Western, would also get a berth. But TWU wasn’t simply satisfied with a ticket to nationals; the Mustangs will go there in style after taking the Canada West Championship.

Out East, Daphne Wallace scored twice as Dalhousie beat Cape Breton 3-1 in the AUS final, but both schools will be heading to Vancouver Island. And, Sherbrooke got a first-half goal from Marie-Eve Jacques and an injury-time insurance marker from Sabrina Hemond as it beat the University of Montreal in the Quebec final.