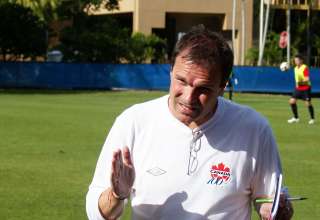 As can be expected with someone on the first day of the job, the Canadian Soccer Association’s new Technical Director, Tony Fonseca, spoke about broad goals, not specifics.

As the technical director, Fonseca’s job will be coordinating all levels of soccer, from the provincial associations and the pro clubs, to get them all pulling in the same direction when it comes to building the game in Canada.

And arguably the hottest topic on the call was the feasibility study of a national Division 2, which has been submitted to the CSA. As the new technical director, he is now the steward of this report and, without giving away any specifics, he said he believes a national division 2 is feasible.

But, this is where it gets interesting. After being asked directly about how FC Edmonton and the Ottawa franchise, set to join NASL in 2014, could be impacted by a new Div. 2, Fonseca didn’t rule out the idea that those two teams would be compelled to join a new Canadian circuit.

Since a national Div.-2 would still be a long way from fruition — you’d need to find owners, a way to get around the travel issue and the very real fact that, outside of the CFL, Canadians have shown they prefer playing in leagues with their American friends — those comments don’t have immediate impact.

Fonseca came to Canada in the late ‘90s. A former Benfica player, he played for the Vancouver 86ers and coached the Whitecaps in 2002. He became the Whitecaps’ technical director in 2004. He later guided Canada’s U-20 program and coached the U-23 team at this year’s CONCACAF Olympic qualifiers. He also acted as Stephen Hart’s assistant with the national team, and was there for the 8-1 drubbing in Honduras which smashed this country’s hopes of making it to the World Cup.

“It was a very painful result for all of us, but it was not an indication of where we are in football,” said Fonseca.

“The problem is deeper than one result, one game.”

CSA General Secretary Peter Montopoli said that Fonseca was chosen over 30 other candidates because it was important that the technical director is familiar with the “uniqueness of Canadian soccer. We needed someone who understands our soccer culture.”