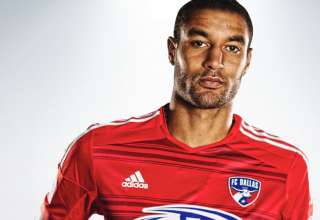 Before the 2014 MLS SuperDraft, Tesho Akindele wasn’t exactly a household name with Canadian soccer followers. But, after emerging out of a Division II NCAA school, he is now one of the hottest rookies in MLS. The Calgary-born striker is raising eyebrows across North America — and he hopes for a Canadian national-team call

Back in October of 2012, a young man named Tesho Akindele watched on TV as Canada was smashed 8-1 by Honduras in a qualifying match that ended this country’s hopes of competing in the 2014 World Cup. Nobody here knew about the hulking forward then, but many Canadian soccer observers are talking about him now.

The 22-year-old is one of Major League Soccer’s frontrunners for rookie of the year, and he wants to play for Canada, although, right now, it’s just a hypothetical.

Born in Calgary, Akindele also briefly lived in Winnipeg and Toronto before eventually settling in the Denver area at the age of eight. His home is Denver, but he feels Canadian too, with family in British Columbia and Alberta. In fact, the forward spent many sum- mers as a kid on Kelowna’s Okanagan Lake, staying with his grandparents on his mom’s side, who live in that area.

“I’ve got family in Nigeria, I’ve lived in the U.S., and I was born in Canada, so I guess I’m pretty international,” Akindele said at BC Place, after playing against the Vancouver Whitecaps earlier in the summer. “Nobody else has called me, so I’d say I’m leaning towards Canada.

I came back to Canada every summer to visit my grandparents. I have a ton of family here. I feel pretty Canadian, so I love the country.”

The exciting thing from a Canadian perspective is that he wants to play for Benito Floro’s men, and has been told national-team scouts are watching him — although, at the time of writing, he had yet to receive any direct contact from the Canadian Soccer Association.

Back in 2009, Akindele took part in a U-17 training camp with Canada, but hasn’t heard back from the Canadian Soccer Association since then – he admits he didn’t have a good showing five years ago, so wasn’t surprised by the lack of interest since then.

“Nobody’s called me yet,” said Akindele. “I heard some stuff at the beginning of the season, like they might call me, but nobody’s called me recently, and it would just be a good opportunity if they do call me. I’m just thankful that there’s a buzz around my name with Canada more than anything else.”

It’s difficult to imagine that call-up won’t come soon, however, as Akindele has been enjoying a fantastic rookie season, notching seven goals and an assist in his first 16 MLS games. On August 18, the former Colorado School of Mines player claimed his first MLS player of the week honour, for bagging a hat-trick against the San Jose Earthquakes on August 16 in a 5-0 Dallas win.

In that game, two of his goals were instinctual poacher-style finishes, as he pounced on a pair of rebounds from San Jose keeper Jon Busch. But there’s more to his game than that — he’s unusually mobile for a big player and, on occasion, can demonstrate tidy footwork. In fact, in his hat-trick showing, he beat San Jose’s Víctor Bernárdez impressively before slotting the ball into the far corner of Busch’s goal.

While the temptation is to stereotype Akindele as your typical speedy and strong athletic forward, there does appear to be more to his game, as he showed against the Earthquakes.

Still, he remains modest when asked to describe his own abilities.

“I’m a hard-working person,” Akindele said. “I can score goals and I’ve got some speed. Those are three things I can bring to the team… I think, lately, Canada has been struggling to score goals, so when people see someone who is scoring goals, everybody is excited about that. Hopefully, I could be that guy.”

One man who feels Akindele could make a difference is his coach at FC Dallas.

“The Canadian national team has a great asset with him, and we’re very proud to have him on our team,” Oscar Pareja said. “He’s a great player, who has become a great professional in a short amount of time. This is due to the help he’s had from his teammates. He’s a great, coachable kid, and he’s doing it.”

For most observers, Akindele is a surprise of sorts. At sixth overall in the 2014 MLS SuperDraft, he’s the highest pick ever from a Division II school — the Colorado School of Mines — and he isn’t disappointing his first pro team for showing that sort of faith in him.

“I didn’t get as much exposure before the combine,” Akindele said. “Nobody really knew about me – nobody knew about me because of the school I went to… my coaches and people close to me told me, play like you can and the rest is going to work out. They knew I’m a goal scorer and I can play well and make it at this level. They just said, ‘be yourself.’”

“Being himself” is working out just fine for Akindele, and it’s been a big reason why people in his country of birth have been following him so closely.

“It makes me feel great,” Akindele said of the interest Canadian fans and media have taken in him. “It just kind of reiterates that I’m playing well and kind of encourages me to work harder and try and improve myself.”

When the player reflects on that 8-1 defeat to Honduras in October 2012, it’s clear he feels the frustration many Canadian fans felt.

“I remember, everybody was like, ‘oh, we’re going to make it — this is our chance to get to the next round,’” Akindele said. “Everybody was kind of excited for that, and that was pretty disappointing.

“But it’s hard to go to those countries and play. I haven’t been there, but I’ve heard stories – it’s a hard place to win.”

That’s the sort of thing Akindele hopes is in the past for Canada, and he wants to play a part in helping his land of origin restore some pride at the international level once again.

“It would be great,” Akindele said of the possibility of helping Canada to international success. “I mean, this is a country that deserves to have a good soccer team. If I could be one piece of that team, I’d feel fantastic.”