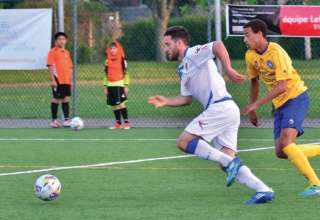 Not every player is ready for the big time once he leaves the academy. The Canadian Soccer Association hopes that this country will soon have several semipro regional leagues that will allow our young players the chance to develop. Quebec’s regional league has created the blueprint for a nation…

Mid-July, 2014. In Brazil, the World Cup is down to the last two teams with the final set to start in less than 24 hours. In North America, the MLS season is close to its halfway point, with all three Canadian teams fighting to reach the playoffs. But for 22 men on a soccer field in Longueuil, a city just south of Montreal, all that is irrelevant. The only thing that matters for them is the next 90 minutes.

This is the PLSQ, the Premiere Ligue de Soccer du Québec. The semipro championship is now in its third year of existence. The second half of the season is just about to start. The marquee match of the weekend is the CS Longueuil-CS Mont Royal Outremont clash.

Mont Royal Outremont was double champion last year, winning both the regular season championship and the playoffs. Longueuil is a new team in its first season in the league. Despite the fact that they’ve met only twice, you can feel that there is a rivalry starting between the clubs. The first two meetings were highlighted by many cards, including three reds, questionable tackles, late comeback attempts and a good number of players complaining to the referee.

In the opening weekend of the season, Longueuil surprised the followers of the league by getting a point in Mont Royal Outremont. Actually, Longueil nearly won, but 10-man CSMRO managed to get a draw after scoring in extra time.

Five weeks later, the two teams met again, this time in Longueuil. Once again CSMRO got a red card, and this time Longueuil was able to hold on to its lead and get the three points, winning 3-1.

It was Mont Royal Outremont’s first defeat of the season.

This growing rivalry has a good cast of characters. From ex-professionals to local stars and young talent, these two teams have them all. For die-hard Canadian soccer fans the most recognizable name is CSMRO’s Abraham François, a former Montreal Impact and Toronto Lynx defender. He really likes what he sees in the PLSQ: “It’s a good league, you can see it’s run professionally. You can also see that it’s getting better every year.”

François, the captain of his team, is also quick to praise his younger teammates: “We lost two of our best young players from last year during the off-season, Hocine Chakib and Nazim Belguendouz, they signed with the Montreal Impact Academy program. In a way it’s a good thing, it’s part of our goal and it shows the league is going in the right direction. It did not hurt us that much, we had young players coming from our youth teams ready to take their place. One of them,  , is really impressive. He’s a 19-year-old central defender. There is not a striker in the league he can’t deal with.”

Longueuil has players from different walks of life. In defence it has Chris De Guise, who spent one fully professional season in Alberta with FC Edmonton. In midfield, one of the team’s stars is Karim Ourzdine. When he’s not directing traffic on the pitch, the 29-year-old is a car mechanic in a local garage. Up front, Longueuil has Raphael De Chantal Dumont. He hails from a family where soccer is king, his brother Samuel plays for Université de Montréal in the CIS. His sister Constance represented Canada in the youth categories, she is also part of the U de M program, in summer she plays in the W-League with the Laval Comets.

The youngster opted not to enroll with the Montreal Impact Academy. Today the gold-medal winner at the last Canada Games is happy to score goals in the PLSQ: “For younger players like me, the PLSQ is a great opportunity to continue playing at a high level. I think it will eventually push the players to continue playing once they get into their 20s.”

Even though they are rivals on the field, both clubs have the same goal. They both want to develop younger players. Longueuil technical director, Romuald Martin, is making it his primary objective.

“We train good players at our club, but in the past, once they turned 18, we were not able to offer them anything to continue their progression. At that age, the majority of soccer players are not the finished product yet. For our club the PLSQ is a step in the right direction. It is in line with our philosophy. It is serious and solid and we hope that, in time, it will be a path toward something better for our players.”

In a way that path already exists. The Impact monitors the league closely. But it is not the only pro club watching the PLSQ. For its first training camp, the Ottawa Fury invited three players who were in the league the previous year. Midfielders Jean Philippe Étienne (FC L’Assomption Lanaudière) and Felipe Costa (CS Mont Royal Outremont) didn’t make the team, but Pierre Rudolph Mayard was signed to a contract.

Mayard, another former Montreal Impact player, was cut from the team after the 2011 NASL season. At the beginning of 2013, he joined the now defunct St-Leonard club in the PLSQ (the team folded at the end of last year, but most people who were involved with it are now with ACP Montréal Nord, an organization that is half private academy, half local club). He stayed there for half a season, just enough to find his rhythm before joining the Rochester Rhinos in USL PRO.

This is another way a league like the PLSQ can be useful. Not only is it a place for younger players to better themselves, but it can also be a good backup plan for when things don’t go the way they should.

Going back to that soccer field in Longueuil and to the 22 players standing on it, for them it’s not about the past or about missed opportunities.

It’s not about the future or about the chance to better their situation.

The whistle is blown. The ball is kicked. Cheers are heard. Longueuil’s players want to show the champion they are no fluke, while Mont Royal Outremont wants revenge.

Right away the visitors push forward. Their strikers, Pascal Aoun and Wassym Amara, go straight at the defence. They open the scoring after 23 minutes on a counter attack. Longueuil tries to respond, but the opposite goalkeeper, Nizar Houhou, is heroic, going as far as saving a penalty following a foul by François that results in one of five yellow cards against his team. But the local team is no pushover and finds a way to equalize just past the hour mark, midfielder Cédric Carrié beating Houhou from the right flank. A couple of minutes later Longueuil thinks it has the winning goal, but the assistant referee raises the offside flag.

After 90 hard fought minutes there is no winner on the field, with the game ending in a 1-1 draw. But in the grand scheme of things the score is only a detail. What is important is that these talented soccer players have a place to play. Not everyone can become an MLS or a NASL player, but there is still talent out there. The PLSQ is a perfect place for them.

It falls in line with what the CSA is looking for in terms of third-division soccer in Canada. This is why, in the end, it’s Canadian soccer that’s the real winner here.