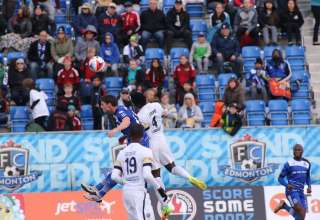 The Canadian Premier League’s first push came from the Hamilton Tiger-Cats. The league’s initial champions were Ticats owner Bob Young and team president Scott Mitchell. They were the ones who brought in current league president Paul Beirne to help build the CanPL towards its scheduled spring 2019 launch date.

Now, fast forward to Wednesday’s committee meeting at Edmonton’s City Hall; on the agenda was a series of guidelines for proposed changes to Clarke Field in order for FC Edmonton to be resurrected as a #CanPL side in 2019. It’s the stadium FC Edmonton called home for NASL games from 2012-17. FCE owners Tom and Dave Fath paid for the stands that nearly tripled the capacity of the facility. It’s also the stadium that was home to Edmonton Eskimos before Commonwealth was built next door. It’s also the place that hosts many minor football games, and the city’s gridiron followers see it as something more than a facility. It’s a holy place.

The proposed changes include raising the capacity of Clarke from just over 4,000 to 7,000, and ensuring that FCE is the prime tenant — giving the club the right of first refusal on game dates that it didn’t have during its time in the NASL.

Those proposals were challenged by the Edmonton Eskimos, who host this coming year’s Grey Cup. So, with that, the CFL and #CanPL love-story thing, is it over? Was it ever really there?

Before we go any further, let’s be clear that Wednesday’s gathering was a committee meeting, the purpose of which was to gather information about the stadium proposals. The committee, even though it features members of council, was simply a first step. Still, because of the number of speakers who wanted to address the committee, the meeting was moved to the big council chambers.

The majority of speakers spoke in favour of FCE, and the turnout inspired team general manager Jay Ball to say “today was a day of validation for our fans and the sport of professional soccer in Edmonton.”

But minor football groups and the Eskimos were also there to stake their claims.

Now, let’s get this straight. Anyone who has followed this website knows how much I dislike the “sport vs. sport” thing. I enjoy the CFL. I love hockey and, on Wednesday afternoon, I had a blast sitting at Rogers Place, watching the Jays beat the tar out of the Royals. In fact, I’ve watched a CFL game with Eskimos president Len Rhodes.

So, if you’re expecting to me to froth at the mouth over the fact that Rhodes appeared at the committee to say that Clarke shouldn’t be expanded until FCE can regularly sell it out at the current capacity, you’ll be disappointed.

Where I think there’s a disconnect is, well, is that an old NASL plan for Clarke is being conflated with the new CanPL one. When FCE was in NASL, the deal with city council was that capacity would be increased if the club could show regular sellouts at Clarke. That was then.

As FCE co-owner Tom Fath confirmed last week, the new guidelines don’t come  from FCE. They come from the #CanPL. The new league is the one that wants its teams to have those rights of first refusal on dates. It’s the league that wants teams to have a 7,000-seat capacity. This is the ante the league requires if you want to play at the poker table.

Why? Because CanPL and CFL made for a heck of a marriage.

CanPL vs. CFL is not a story anyone wants to see play out..