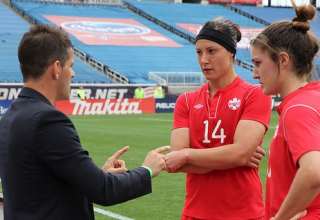 Two months to go until London 2012. It’s the big tournament the Canadian Women’s National Team has been waiting for since the disappointment of last year’s World Cup, in which Big Red crashed out in the group stage with three straight losses to Germany, France and Nigeria.

The team is in the midst of a residency camp being held throughout Metro Vancouver, as head coach John Herdman prepares his charges for the biggest tournament under his tenure since taking over from Carolina Morace in September, 2011.

“It’s huge,” captain Christine Sinclair told The 11 after a training session at North Vancouver’s Kinsmen Stadium Monday evening. “It’s our camp preparing for the Olympics. It’s a unique opportunity for us to be in Vancouver together for two or three months. We’ve got a lot to work on and that’s giving us that chance.”

Part of what the team is working on is changing the attitude toward possession and direct play. In the CONCACAF Olympic Qualifying tournament, Canada generally attempted to dictate play against weaker opposition by playing it short. Herdman is now encouraging his players to play possession football when appropriate – but also not to shirk away from playing a more direct style against superior technical sides.

“You have to mix your style up,” the 36-year-old Geordie said. “We want to be good at being an over, around and through team. We want to be three-dimensional in our play. Even when you watch the USA or Japan, if a team presses them they’ll go long. They’re very good at missing midfield units out, but then they’re very good at once they secure a higher position up the pitch, getting back into possession.

“I think the team we have here is more predisposed to the counterattack,” Herdman continued. “We’ve been working on the possession against the tier-two teams. We look really good – we can control the tempo of games, we can move the ball freely into positions, but against those tier-one teams that are very well organized, it takes a lot more movement and a lot more technique, and I think these players have been working hard in the last three, four months to bridge that gap.”

If counterattacking is a strength of this squad, it’s a good thing for Canada given the quality of opposition the team will face in Group F, where it’ll face World Cup champions Japan and fifth-seeded Sweden. World No. 65 South Africa rounds out the group. Canada’s tournament begins against Japan on July 25, an occasion the team’s all-time leading scorer is clearly relishing.

“Why not?” said a smiling Sinclair when asked about playing the world champions to kick off the tournament. “Usually in big tournaments the first game is the hardest to get your flow – teams aren’t in rhythm yet. We’d rather play Japan in our group than in the quarters – at least we avoid them.”

Canada’s qualification for the knockout round is more than probable given the top two teams in each group and the top two third-place teams advance, but there is a slight possibility the team’s fate could come down to a matchup against Sweden in the final group game.

“That last game is going to be fantastic,” Herdman said. “It’ll be a real cup final – I think it’ll go right down to that last game. I don’t think South Africa will be a pushover – they might cause an upset – not against Canada – but hopefully against one of them other two teams.

“Everything will go down to that last game. I don’t intend to get beat at St. James Park. This team ain’t gonna get beat in Newcastle – you can take that Sweden game as a given.”

While capturing a medal in London is the target, and a realistic one for the sixth-ranked team in the tournament, the still lingering memories of last year’s World Cup failure mean nothing will be taken for granted.

“We’d love to get on the podium,” Sinclair said. “That’s our ultimate goal, but we have to get out of our group first – and I think we learned that last summer — so right now we’re focused on that.”