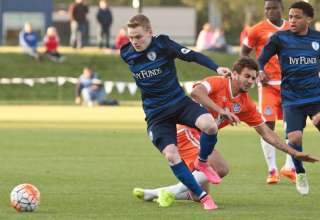 Unlike NASL and MLS, the USL recognizes Canadian players as domestics on the rosters of their American teams. With a Canadian coach, Swope Park Rangers has become a home away from home for our soccer exports…

The goals came 34 minutes apart: One a study in pace and touch, the other a classic example ofwhy you always follow the shot.

It was a chilly night for mid-May, fans huddling together to keep warm as they watched the United Soccer League’s Swope Park Rangers try to break a couple of deadlocks – first 0-0, then 1-1 – against the visiting Tulsa Roughnecks.

Canadian winger Tyler Pasher delivered the goods both times, scoring first on a sweetly struck chip after a layoff from centre forward Dániel Sallói, then pounding Sallói’s saved shot home from close range for the match-winner.

That’s the sort of outing that gets a young player noticed by a Major League Soccer side – and with the coaches from parent club Sporting Kansas City watching from atop the pressbox, Pasher picked his moment well – even if he was humble about it after the fact.

“I don’t really think about that,” the 22-year-old – who spent time in the youth system of English side Newcastle United before coming home to join Toronto FC’s academy in 2010 – said after a recent training session. “I just put my head down and keep working hard every day, and see where it takes me next.”

Here’s the rub about that “next” part, though: In USL, which is considered the third tier of pro soccer by both the U.S. Soccer Federation and the Canadian Soccer Association, Pasher and the other three Canadians on the Rangers’ roster – forward Mark Anthony Gonzalez and defenders Amer Dedic and Johnny Grant – occupy domestic roster spots, no matter which side of the border in which they play.

But in MLS and the second-tier North American Soccer league – the former with three Canadian teams, the latter with two – American clubs must count Canadians against their limit of international slots, unless those players have green-card resident status. Meanwhile, American players on the Canadian sides are considered full domestics.

A green card can cost anywhere from US$5,000 to US$8,000 — a hefty sum for a player in a league with no minimum salary, where the best players might make US$3,000per month, and that only in-season — and Sporting, while active about securing green cards for members of the senior squad, has no immediate plans to do so for Rangers players.

Pasher doesn’t spend a lot of time thinking about whether players from both nations should count as domestic players in those higher leagues, either.

“To be honest, it would be nice for me and other Canadian players,” he said, “but again, that’s something that the leagues would have to make a rule. Then again, you just have to take your chances.”

Swope Park manager Marc Dos Santos, a native of Montreal who holds both Canadian and Portuguese passports, is far less reserved on the issue. He doesn’t think the double standard is fair to players trying to make the move up to a better league while staying on their home continent.

“This is a kid that Toronto FC took,” said Dos Santos, who was the NASL’s coach of the year with the Ottawa Fury in 2015 before joining the expansion USL side in Kansas City. “Always showed incredible flashes. Needs to find consistency. The question is, would Tyler be here, if a Canadian would be considered a foreigner? I don’t know. Would Tyler be more considered to our first team, for the MLS, if he was not a foreigner? Now, for him, in USL, he has an excellent market. Teams respect him. If he leaves here, he’s going to find another market in the USL. But maybe for him to get to that next level, it blocks him a little bit because he’s a foreigner. And I don’t think that’s fair.”

It doesn’t strike Didic as fair, either.

“We’re pretty much neighbours,” said Didic, who was born in Bosnia but grew up in Edmonton. “We speak the same language, and all that. I think we should be considered domestic if we’re coming in from Canada. Canadian players trying to come into an American team, or American players trying to come into a Canadian team — we both should be considered domestic.”

Firstly, he wants to send as many of his players as possible – not just the Canadians – on to higher leagues. That’s just good sense for any lower-tier manager; it will help him land more talent down the road, and also puts him in the conversation for a move to a higher profile job if his club and its players are successful.

Dos Santos’s emphasis on player development, Pasher said, was a bigger factor in his own decision to come to Kansas City than their shared nationality.

“I was excited to come and learn from him,” he said. “He’s a very fair coach. He’s a players’ coach. He knows how to coach each player’s personality, and to get the best out of each player.”

And if that translates into a higher-profile coaching job, there’s one high on Dos Santos’s wish list – a dream job that helps fuel his desire to level the field for Canadian

“My dream is – and I’ve never hidden this; it’s clear to everybody – that I want to coach Canada one day,” he said. “I believe that what’s happening now, with MLS and the NASL giving opportunities to a lot of young Canadian players, is that you see a generation of young Canadian players coming up. We had our U-20 team go to England about a month ago and beating England 2-1 in London.

“When I look at the development in the future, it looks very positive for Canada. Now, I think it’s still difficult.”