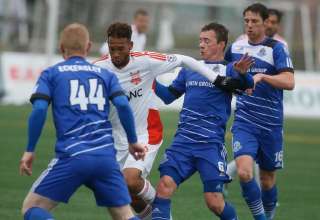 Nik Ledgerwood was born and raised in Lethbridge, but left town when he was a teenager so he could pursue his soccer career. More than a decade later, he’s come back to his home province…

Lethbridge is not a place you’d call a soccer hotbed.

The southern Alberta city has produced more than its fair share of hockey stars, though; look through the archives and you see the names of great junior or amateur hockey clubs. The Lethbridge Native Sons. The Lethbridge Maple Leafs. The Broncos. The Hurricanes.

But, in a place that’s clearly a fine example of a prairie hockeytown, Nik Ledgerwood defined himself in another sport. While the other kids dreamed of playing in the NHL, he was on a soccer path that would take him to Europe.

As a teenager, he’d leave Lethbridge and settle in Calgary — where he played in 2002 for the Storm of the United Soccer Leagues’ A-League. A year later, he was off to Germany and a new beginning at 1860 Munich. He’d go on to spend more than a decade playing mostly in Germany, with a brief spell in Sweden. He became a fixture on the Canadian national team.

But, in 2016, Ledgerwood decided to come home to Alberta, and signed with FC Edmonton. Since then, he’s been a fixture in the holding midfield role. In his spot on the field, he’s not going to pile up goals and assists; but he’s been a major reason why the Eddies had given up a league-low seven goals in the 10-game spring season and sat just a point behind the Indy Eleven and New York Cosmos in the table.

It didn’t start out all rosy, though. The Eddies didn’t score in their first three games of the regular season, and Ledgerwood admits that he wondered if he’d made the right decision.

“At the start, I was going into uncertainty. I didn’t know what I was going into. The first couple of games were kinda hard to get results, so it was like ‘you know, where is this going?’” he recalls. “But, now, I think this team has found its identity and gelled together nicely and everyone has seen the results from that. We’re grinding out great wins, wins that maybe in the past (for FC Edmonton) would have been a draw or maybe we would have lost the game in the last minute. I think it’s been a good decision, so far.

“Looking back on it, everything has been positive so far, it’s just a matter of keeping this going as long as we can.”

Before signing with FCE, Ledgerwood chatted with long-time Canada teammate Julian de Guzman, who was entering his second season with the NASL’s Ottawa Fury. JDG gave the league — officially considered second division in North America — a ringing endorsement. That weighed positively for the Eddies; Ledgerwood already wanted to come home — he has family in Calgary and Edmonton, as well as in Lethbridge. But you can’t just sign with a team because you’re homesick — you need to know the competitive level is there.

Still, there was a lot of get used to. NASL teams have long travel schedules; a team flies coach and Edmonton doesn’t have a lot of direct connections to other NASL cities, many located in the deep south of the United States. FC Edmonton puts on more miles than not only any other pro soccer team in North America, but more than any other National Hockey League or National Basketball Association club. And it will get even worse in the fall season, when Puerto Rico FC joins the league. When the Puerto Rico Islanders played in the early years of NASL 2.0, the trip from Edmonton to San Juan would take three flights and maybe 12-14 hours.

And the playing surfaces can be tricky. When the Eddies played their season opener at Rayo OKC, the newly laid artificial surface still had nails on it. In Jacksonville, sod is laid over a baseball diamond, leaving dangerous seams and many dead-grass spots that make it look like the game is being played on a giant tee box. FCE’s Cristian Raudales suffered a non-contact injury on that turf that kept him out for half of the spring season.

And the Eddies play at Clarke Field, a city-owned facility. The Eddies’ practice schedules follow the city’s given time slots. When a session is scheduled to run from 10 a.m. to noon, the team cannot be on the field at 12:01, even if there’s no one who has reserved the next time slot.

“The schedule, the travel,” says Ledgerwood. “It’s a different kind of travel schedule. We just finished six games in 19 days. You don’t really get that in Europe. You get your games but you’re only travelling maybe two hours. Here, the shortest trip is four hours — on a plane. You’re going through two different time zones. And then there’s the turf. As much as people don’t want to admit it, turf is hard on your body and it takes time to recover from hard games and travel… You got a mix [of surfaces] with a baseball field, and you’ve got to jump over a pitcher’s mound and all that fun stuff.

“But, I don’t think there’s any team in the league that says ‘Oh, Edmonton, that’s a nice away game.’ I think everybody kind of dreads coming up here, they don’t know what the weather will be like, you have that long flight. We’ve got to use that to our advantage.”

Playing in the NASL hasn’t hurt either de Guzman, Ledgerwood or Marcel de Jong — who played the spring season with the Ottawa Fury — in the eyes of Canadian national-team coach Benito Floro. And Ledgerwood believes that more Canadian national teamers will find their way to the league in the future.

“I think the most important thing with him is that you have to be playing. You have to be game fit. I think Benito would rather see guys playing in NASL, playing every weekend, than in MLS or over in Europe and not even playing. This hasn’t hurt me at all, coming to Edmonton. I think you’ll see a lot more players come to NASL. I think you will see a lot more guys who aren’t getting playing time in MLS to then come to NASL teams. Even if it’s on loan, the possibilities are definitely there.”

When Ledgerwood was signed, FCE coach Colin Miller — who, as a former national-team manager, knew the player well — wanted more than just a midfielder. He said that he wanted a player who would be an example to all of the charges in FCE’s academy. The young Alberta kids could look up to a player who, 15 years ago, was where they are today.

And Ledgerwood recalls what it was like when he had to leave Lethbridge.

“I think when I started to get called into the Alberta teams, when I was one of the only underage players on an Alberta team, I think that’s when I began to really notice that ‘OK, maybe something could happen.’ And then when I got called into my first Canadian camp, I was 14 and we went over to Duisburg in Germany — and that’s when it really hit me, you know that there is a possibility of this turning into something that’s more than a hobby.”

But even the move to the Calgary Storm was a challenge.

“It was difficult. The transition helped me a lot, going to Calgary, I moved in with a couple of guys who I knew, which helped. I think if I would have gone from Lethbridge straight to Germany, it would have been really difficult. But moving to Calgary first, being on my own for a year and a half, with the guys I knew, it really helped that transition to be able to go to Germany by myself.”

Those two players were Waldo Dutra and Chris Lemire — both, ironically, players who’d come from Edmonton.

Lemire would later play for the A-League’s short-lived aviators and would become a charter member of the FC Edmonton roster.

Now, Ledgerwood has returned to Alberta as a role model. He went back to Lethbridge and got married during the break between the spring and fall seasons. He’s putting his roots down — but, he’s got a long way to go in this latest chapter of his soccer career.