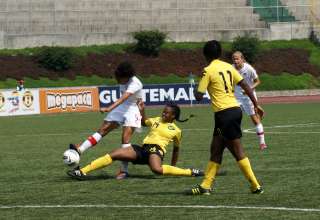 Canada’s dominance at the CONCACAF U-17 women’s championships continued on Friday. Two days after the Canadian teens throttled Panama by a 6-0 count, they made easy work of Jamaica, winning 4-0 in Guatemala.

Valerie Sanderson and Elissa Neff, who volleyed her effort home, put Canada ahead 2-0 before the 25-minute mark. In the second half, it was Summer Clarke’s turn to shine once again. The offensive star of the Canadian side, who scored three and set up two more against Panama, got on the scoresheet in the 56th.

Jamaica had one decent chance all afternoon, when a shot struck the bar midway through the second half.

But, an injury-time goal from Nichelle Prince added the insult to the injury.

Canada faces the host Guatemalans on Sunday, knowing it is in command of Group A. Finishing first will mean Canada will likely not have to face the United States in the semifinals. The top three teams in the tourney go to the U-17 Women’s World Cup in Azerbaijan. So, if Canada wins its semifinal, it is in. If it loses the semifinal, Canada has to win the third-place match in order to qualify.