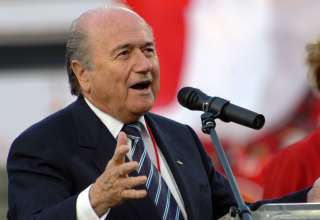 As press conferences go, the announcement of Canada’s 2015 Women’s World Cup host cities was about as anticlimactic as they get.

Edmonton, Moncton, Montreal, Ottawa, Vancouver and Winnipeg were named the host cities for the tournament. What cities will actually get big games (semifinals and final, as well as the Canada matches) will be determined later. Each of the cities will also host games at the 2014 U-20 Women’s World Cup.

Halifax dropped out and Toronto was never interested (that is, city government, not the fans in Canada’s largest city) because it has the Pan Am Games in 2015.

So the six host cities was a done deal. In fact, it was such an obligatory presser that the first question that FIFA president Sepp Blatter fielded from the press gallery was about Brazil 2014. In fact, the press conference handlers had to ask the media to keep the questions to the 2015 WWC.

Call us the Mostly Harmless World Cup. But maybe that’s just a sign of the confidence in Canada’s ability to put on a World Cup without a hitch.

But, outside of the names of the cities, there was the obligatory mention of the 2002 women’s U-19 championship final in Edmonton, which was the highest-attended youth women’s game in history. This time it was Canadian Soccer Association president Dominique Maestracci who brought it up. That Edmonton final between Canada and the U.S., in the tournament which was Christine Sinclair’s coming-out party, continues to be our Greatest Hit whenever we talk about women’s soccer in this country.

Blatter mentioned said he supports goal-line technology… but no other technology in the game.

In fact, other than having problems understanding a few of the questions, Blatter didn’t say anything really inflammatory, which is the reason most of us probably tuned in, anyway.

Really, the most important announcement was that the field at the 2015 WWC will be expanded to 24 teams, up from the 16 in Germany 2011. With six cities spread across the second-largest (by land) country on the planet, it makes sense. But it’s doubtful, if past men’s and women’s World Cups are any indication, that each city would act as a hub for a four-team qualifying group. The effort is usually made to move teams around the host country so they can be exposed to more fans.

Government dignitaries made speeches, city officials got some pennants and handshakes, and Blatter got a Canada scarf.