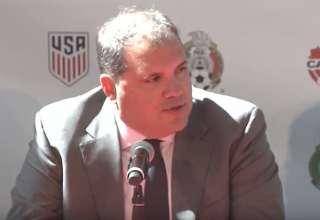 It’s funny that, a couple of years ago, the Canadian Soccer Association was telling one and all that it was not going to share its bid for the 2026 World Cup.

Of course, that was before the federal election, and the change to a Liberal government that never sounded quite as excited about taking on a World Cup bid as the Conservatives has been before. A couple of years ago, there was no talk of a Canadian city hosting the Winter Olympics; now, Calgary is being bandied about as a potential host for those Games.

But, when the Mexican, American and Canadian soccer associations joined together Monday in New York to unveil that they would sign a memorandum of understanding to jointly bid for the 2026 World Cup, United States Soccer Federation President Sunil Gulati said that, in fact, this tripartite pact had been in the works for years. He said that he and Canadian Soccer Association President Victor Montagliani had been discussing a joint effort from, well, a time before Montagliani was elected to the CSA’s top job.

“There has been a lot of work done, behind the scenes for many years,” Montagliani said.

So, the conclusion: While Canada was talking about going it alone, the CSA always knew deep down that it wasn’t going to do that.

Of course, FIFA’s move to a 48-team World Cup means more games, more stadiums, more host cities, so it’s more difficult for a country to host the mundial on its own. But, when Gulati and Montagliani first spoke, well, the 48-team World Cup wasn’t a thing, yet.

But let’s get to the bid itself. First off, maybe we need to stop calling this a joint bid and referring to it for what it is — an American bid to host the World Cup, with a few token games in Mexico and the United States. Gulati said the U.S. will get 60 of the 80 games, Canada and Mexico will get 10 each.

Montagliani said that he would expect that the tournament would be played on grass, as previous tournaments have been.  If Canadian stadiums have to make the expensive conversion to grass for the tournament, well, that’s could be a lot of taxpayer cost for not a ton of matches. As much as the game of soccer means to us, as much as we promote the game, Canadians will need to understand just how cost-effective going to all this effort for just 10 games can be. Gulati said that this will be a cost-effective bid. We will see.

No decision has been made on host cities, but Gulati said the bidders are  “more in favour of more venues than less,” so that would make it seem like Canada can’t just park its games in Vancouver and Toronto and be done with it.

But today is about the memorandum of understanding. We’ll learn more about the bid itself as details emerge. It will be fascinating to gauge the reactions of Mexican and Canadians fans to the notion that they’re getting 10 games each, while the U.S. gets 60.

We just need to make sure that the Americans then bear three-quarters of the cost of the bid.