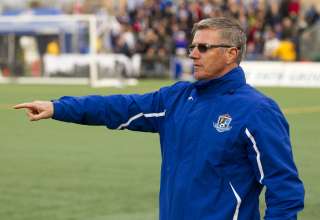 If the Eddies don’t get points this weekend at North Carolina FC, their odds of being in the NASL spring-season race, well, they might just get awfully long.

Through two games — both against Jacksonville, the Eddies have zero points. They have yet to score, though Adam Straith came painfully close in last weekend’s home opener, directing a headed effort square off the crossbar.

But, Miller doesn’t think his team has struggled. In both losses, critical mistakes led to Jacksonville’s winning goals.

“I believe we should have four points now, but we don’t,” Miller said. “I can’t fault the players. The were simply devastated after Saturday’s game.”

He said the dressing room was absolutely quiet after Saturday’s loss, as players tried to reconcile their efforts with the result.

The Eddies took 16 players to North Carolina, and left on Wednesday, even though they don’t play till Saturday night. The reason? Considering the Eddies’ history of nightmarish flight routing, delays, lost luggage, you name it, when they head to North Carolina, they decided to give themselves a buffer in the travel schedule. They also knew that the Easter weekend is filled with flight delays, so they planned to be down in Cary, N.C., before the extended long weekend rush began.

Defender Pape Diakite, last season’s NASL Young Player of the Year, is with the Eddies on the trip, after missing last weekend’s match due to what the team said was an illness.

Miller said it will be nice to play North Carolina in the early spring, before the oppressing heat and humidity forces teams to change how they play.

“We don’t want to be trying the 80-yard counterattack all the time,” he said. “It’s great that we’ll be playing there when it’s not 100 degrees. We can press a little higher; it’s hard to sustain that kind of game when it gets that hot.”

And Miller said the team is ready if former Eddie Lance Laing takes the field for North Carolina. Laing was knocked out of action in North Carolina’s opener after taking a blow to the head, what Miller called a “horrible challenge” from Miami FC’s Gabriel Farfan.

“But we know all about Laingy,” said Miller. “And we know what we have to do to eliminate him from the game.”