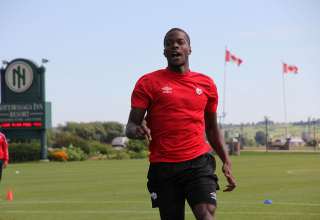 Simeon Jackson and Tosaint Ricketts scored second-half goals late to give Canada an important 3-0 away win Tuesday over Puerto Rico in a 2014 FIFA World Cup Qualifier.

The two second-half subsititutes followed a late first-half strike by Iain Hume to give Canada its second win in as many games following a 4-1 win over St. Lucia Friday in Toronto.

“We knew coming into Puerto Rico—the environment, the weather, the pitch that it was going to be a tough game. The guys came together very well and got the result so we’re all happy about it. We finished the trip off well,” said Ricketts.

“We came into this camp saying that we needed to get two wins and we did it, so there’s not much you can say about it. It was a good camp for the guys. Everyone’s happy and we can go back to our clubs now.”

Overcoming heat and a hard field at Estadio Juan Ramon Loubriel in Bayamon, the western suburb of San Juan, Canada sits in first place with a full six points from two games. St. Kitts and Nevis’ 4-2 win over St. Lucia earlier Tuesday keeps it two points behind Canada, while Puerto Rico with one and St. Lucia at zero bring round out the group with four games remaining for each side in the second round group stage. Only the group winner advances to Group C in the semifinal round, where it will face Honduras, Cuba, and likely Panama next year.

Prior to this game, the two CONCACAF members had never faced each other in men’s action with the only meeting a women’s match in a FIFA Women’s World Cup USA 1999 qualifier, which Canada easily won 21-0. Despite its status as a protectorate of the USA, 144th-ranked Puerto Rico fields its own national team in soccer, albeit an inactive one. Playing in only its second game in the last 10 months, its cohesion from experience playing on the NASL’s Puerto Rico Islanders helped it start strong as it held the majority of possession in the opening 12 minutes. It led to three corners and two chances with Islander Noah Delgado nearly opening the scoring in the ninth minute. From the right flank, Delgado turned inside with the ball and sent a shot that deflected off Terry Dunfield wide of the goal and a diving Lars Hirschfeld.

“I think mentally we were prepared to realize that they would come early the in game, trying to get a goal on us and probably rattle us. I told the guys the game was probably going to be won in the second half especially in this heat so be patient. Don’t give the ball away,” said Canada coach Stephen Hart. “Overall I thought in the first half we played way too narrow. We tried to force the ball and that made it easy for them to defend. Late in the first half, the last 10 minutes we sort of opened up and the second half we played with a lot more width and that caused them a lot of problems.”

After absorbing the initial pressure, Canada started to control the possession, even without the services of Atiba Hutchinson, who was replaced by Will Johnson in the starting XI. It was one of four changes coach Stephen Hart made to his starting lineup from the St. Lucia game that also had defender Mike Klukowski in for Ante Jazic and David Edgar in for Jonathan Beaulieu-Bourgault.

Midfielder  Dunfield replaced Jackson in the lineup, as Canada went from a three-forward attack to a two-man front. Canada’s patience paid off late in the first half when Hume, earning his second straight start, capitalized on a defensive mistake to give 102-ranked Canada the lead. Defender Klukowski sent in a cross from the left flank that was partially cleared, but Hume was in the right place to direct a low-right-footed shot in the 42nd minute by goalkeeper Eric Reyes.

“It’s been a long time since I’ve scored (for Canada). Like I said last week, it’s just good to be back in the fold. I think we made it difficult for ourselves on Friday and then obviously the weather down here’s been horrendous. It’s been tough for us to cope,” said Hume after the game. “We’ve only had one chance to train and then coming into the game today it was a lot warmer than it was yesterday. All credit to the boys and to pitch in with the goal, I’m over the moon.”

Pushing for the equalizer late, Puerto Rico applied pressure and nearly got it in the 73rd minute. Andres Cabrero drove down the left flank and sent a cross to an oncoming Tyler Wilson, who beat Hirschfeld with his bouncing header, but sent it just wide of the goal. That was as close as it would come. Canada struck twice late in the second half to send the sparse crowd estimated at 2,000 streaming for the exits.

Jackson added an insurance marker in the 84,th taking a punchout clearance by Reyes of an Edgar free kick and sending a low drive into the goal, his third for Canada.

Minutes later, in second-half injury time, Jackson assisted on  Ricketts’s marker to complete the scoring Ricketts took a pass from Jackson who broke down the right and sent the ball by a helpless Reyes.

Riding momentum, Canada will now have a month off before its next qualifier Oct. 7 away at St. Lucia.