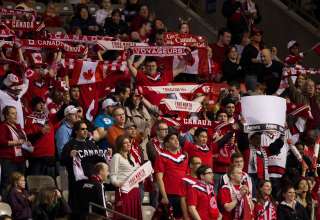 Christine Sinclair put on another display of offensive mastery scoring and setting up another goal to lead Canada to a 2-0 win over Cuba on Saturday and earn a place in the semifinals of the CONCACAF Women’s Olympic Qualifying Tournament.

Playing in her hometown, Sinclair has been a one-woman offensive force scoring five times and setting up two more in the first two games of the tournament that will send two teams to the London Olympics.

Only a second-half substitution prevented her from padding her statistics against the 97th-ranked Cubans, the lowest ranked team in the tournament.

Sinclair’s work helped Canada keep pace with Costa Rica atop Group A with six points.  Costa Rica beat Haiti 2-0 earlier in the first game of the doubleheader to set up a critical showdown Monday for first place in the group.

The loser will likely face the United States in one semifinal and have the unenviable task of having to beat the world’s No. 1-ranked team to earn one of two Olympic berths from the North America, Central America.

Melissa Tancredi also scored in front of a partisan B.C. Place crowd of 12,417, the largest of the tournament to date.

“I think generally job done, that’s two games we managed to rest a few players tonight and we only need a draw to qualify for the top of the group with the goal differential that we’re carrying,” said Canada coach John Herdman. “ It’s in a good space for Canada now and I think we can take Costa Rica in a different light and make sure that we’ve absolutely got everyone ready to go.”

With mounting injuries and a plan to give everyone playing time at home, Herdman said after the Haiti game Thursday his starting lineup would be very different.

He kept his word replacing eight starters leaving only Sinclair, Tancredi and Shannon Woeller from the lineup that started against Haiti.

Despite the makeover, Canada continued their dominant play effectively moving the ball up the field and having long spells of ball possession.

It paid off early as Canada broke open the scoring in the 17th minute after some good hustle from Kaylyn Kyle in the 16th minute.
Kyle had a give-and-go with Sinclair and on the return pass was hauled down in the penalty area by Cuba’s Marianela Chacon drawing a penalty call from Barbadian referee Gillian Martindale.

One minute later, Sinclair calmly deposited the ball low and into the right corner of the goal by helpless goalkeeper Katherine Hidalgo for the 125th goal in her illustrious career.

The goal also tied her with Mexico’s Maribel Dominguez for the all-time scoring lead (11 goals) in the final round of CONCACAF Women’s Olympic Qualifying.  Sinclair, Dominguez and the USA’s Abby Wambach will wage a three-way battle for the lead throughout the course of the tournament.

Sinclair showed she can create as well as score when she set up Tancredi in the 24th minute for Canada’s second goal.  Canada’s captain took a seeing-eye pass from Alyscha Mottershead (who was a late roster addition to replace the injured Diana Matheson), came down the right side of the penalty area and sent a beautiful cross that Tancredi headed off the Hidalgo’s leg into the top of the goal.

The score was not as lopsided as the chances — Cuba recorded just one goal attempt compared to 30 for Canada.

Canada pinned the Cubans in their end for much of the game.  But minus Sinclair the team couldn’t finish around the goal thanks to missed chances and some big saves by Hidalgo.

Herdman, though, wasn’t concerned with his team set to play more quality opposition in the next two games.

“You’ve got to accept that in football when a team camps that deep it’s a rarity you don’t get that every often they put 11 players or 10 players in a certain part of the pitch it becomes very different to break down, it’s a patience,” said Herdman.

“I mean I think we could have moved the ball wider quicker, there was something about the pace of the ball tonight, but you know we had players out there that were new and for some of them that was their first experience of a crowd like that at home and they were giving it their best shot.”