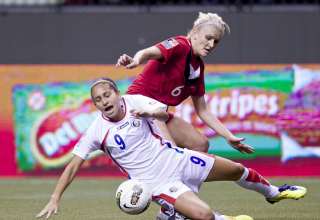 Christine Sinclair scored twice and set up another goal to lead Canada to a dominating 5-1 win over Costa Rica Monday and first place in Group A at the CONCACAF Women’s Olympic Qualifying Tournament.

The win maintains Canada’s perfect record all-time against Las Ticas at nine wins in as many games.

More importantly, it puts Canada in position to avoid the United States in the semfinals pending the outcome of the Americans’ game against Mexico Tuesday for first place in Group B.  A U.S. win and it will face Costa Rica in one semifinal, while Canada would face Mexico.

The two semifinal winners will earn a berth in the London Olympics, making the tournament final on Sunday anticlimactic and limited to bragging rights.

“We’re following a plan. The lineup tonight, these girls here the players on the pitch I thought they were phenomenal for a period of time,” said coach John Herdman.

“They did what they had to do they destroyed Costa Rica in the first half and in the second half they can do something a little different, which was about conserving and making sure we got through the game. It’s sad about the goal at the end, but that’s the way football is.”

Herdman reverted back to virtually the same starters that took the pitch in the first game against Haiti after resting them against Cuba.

The one-game rest paid dividends as Canada thoroughly outplayed the Central Americans from the opening whistle holding possession and pinning them in their own for most of the match.

Despite playing well in wins over Haiti and Cuba, Costa Rica failed to generate any offence and hardly penetrated into Canada’s end.  Each time a Costa Rican touched the ball, she was swarmed my numerous red shirts.

The early possession advantage enabled Canada to quickly open the scoring, courtesy of Sinclair in the sixth minute.

The captain took Rhian Wilkinson’s feed right in the goal crease turned around and left-footed a strike into the top of the goal for her sixth of the tournament.

Four minutes later, Canada increased its lead to two thanks to a great solo effort by Kelly Parker.  Parker drove through the penalty area by a couple of defenders and centred a pass that goalkeeper Julieth Arias couldn’t handle. Schmidt jumped on the loose ball for her first of the tournament.

A 3-1 Canada win Oct. 18 at the Pan American Games in Guadalajara in their last meeting pointed to a close contest.  But the two early goals, put Costa Rica in an early hole from which they couldn’t escape.

Kyle continued the barrage, making it a three-goal advantage in the 19th minute after taking a beautiful centring pass from Sinclair on the right side of the penalty area and heading it by a helpless Arias.

“We had a game plan and we stuck to it in the first half and it got us a couple of extra goals,” said Kyle. “So I think that’s our mentality that he’s (Herdman) talking about is following our game plans, not for 40 minutes, not for 65 minutes, but for a full 94-minute game.”

Just before halftime, Canada made it a four-goal lead on Sinclair’s second of the game.  Wilkinson took advantage of a poor clearance in the penalty area corralling the loose ball and sending the ball back into the box for Sinclair, who controlled it and calmly slotted it by Arias.

The goal was the Burnaby, B.C. native’s seventh of the tournament and 127th in her career.  It also catapulted her back into the all-time scoring lead in the finals of CONCACAF Women’s Olympic Qualifying with 13 goals, one ahead of the United States’ Abby Wambach.

A freak own goal in the 50th minute added to Costa Rica’s misery.  Under no pressure, Ugalde passed the ball back to Arias, but the keeper whiffed on the kick as the ball rolled into the goal.

Costa Rica saved some face late in the game on Barrantes’s strike in the 89th minute.

She took a long pass in the penalty area from the right flank from Raquel Rodriguez and sent a drive over the arms of Canadian goalkeeper Karina LeBlanc.

Downcast for much of the match, Barrantes and her teammates reacted with strong emotion to the goal, the first Canada allowed in the tournament.

Canada will now have three days to prepare before facing either the U.S. or Mexico in one semifinal.