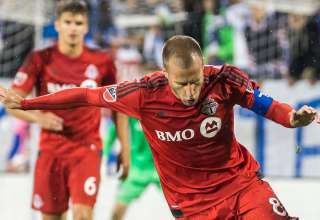 The two goals in extra time, from the head of Benoit Cheyrou and the lunging legs of Canadian Tosaint Ricketts, will be the ones that get played on the highlight films years from now. Those will be the goals that will be toasted when Toronto FC fans look back at arguably the greatest playoff series in MLS history.

After Wednesday’s 5-2 triumph a.e.t. for TFC over the Montreal Impact at BMO Field, the MLS Cup finale between the Seattle Sounders and the Reds will have to be an eight-goal barnburner or better in order for it not to feel anticlimactic. TFC entered the game trailing the series 3-2, but led the second game 3-2 after 90 minutes, sending the MLS classic-of-classic Eastern Conference Final into extra time.

But, this is for sure. Just the thought of corner kicks will give Impact supporters nightmares throughout their offseason. All three TFC goals in regulation time of the second leg came off of corners that Montreal couldn’t deal with. Armando Cooper hammered a second-chance effort home; Jozy Altidore flicked a near-post header backwards into the goal; and Nick Hagglund brought the see-saw affair level at 5-5 on aggregate with a header into the corner.

Set pieces can change games. Five goals should have been enough for the Impact to take the tie over 180 minutes. The problem was that Montreal couldn’t defend set pieces. Heck, it was there for the taking — TFC’s Sebastian Giovinco, in his team’s most important game so far, had a performance that would make Antonio Conte say “see, told ya so.” The Atomic Ant was subbed off early in extra time, dealing with injury. But no team can withstand giving up three corner-kick goals in a game.

Did I mention  that not being able to defend corners can kill you?

“We should have done a better job on set pieces that is for sure,” said Impact coach Mauro Biello. “The second goal, Altidore’s, we should have done a better job, when you have a disadvantage you need to get a body in good positioning, and we weren’t able to do that. They scored three goals from set pieces and got themselves in the MLS Cup final.”

This was a classic, though, like watching two heavyweights beat each other silly back in the days when title fights went 15 rounds. And credit has to go to referee Jair Marrufo, who gets an honorary Canadian citizenship for taking a very north-of-the-border approach to refereeing in a big game – he put the whistle in his pocket. For sure, there will be those who would howl that TFC’s Jozy Altidore should have been penalized for his collision with Montreal’s Hernan Bernardello; maybe Laurent Ciman could have seen a second yellow for a late challenge on Giovinco. And maybe Montreal keeper Evan Bush did make enough contact with TFC’s Armando Cooper to warrant the home side being awarded a penalty.

But, hell, let the players decide these things. I know it’s a cliche, it comes off like Don Cherry-meets-soccer, but the game was better off because Marrufo used his judgement  and decided not to send anyone off. Other referees might have. It’s common practice in North America for fans to criticize the PRO referees assigned to MLS games, but Marrufo deserves a round of applause for creating an environment for the players to put on the show. It was tough, it was ugly at times, but, heck, games like that are what rivalries are built on.

Finally, let’s note the contributions of two of the players I have really enjoyed writing about over the years. No matter your allegiance, you had to admire Patrice Bernier’s play over the two legs. On Wednesday, he absolutely bossed TFC’s Michael Bradley on the Impact’s opening goal, beating Bradley’s challenge on sheer strength, then fired a pass to Matteo Mancosu, who then played the ball to Dominic Oduro, who finished the play.

And then to see Tosaint Ricketts dive to redirect Jozy Altidore’s cross into the Impact goal in extra time, to watch him celebrate with the 36,000 (oops, 35,500 — 500 there were Impact supporters) fans at BMO Field, it was special. For those who know about what Ricketts has had to put up with through his career — two separate teams that missed payments, playing throughout Europe, always answering the call for the national side — it was a special moment.

“This moment right now, actually I’ve been visualizing this all day, coming back in the dressing room with the boys and just celebrating,” Ricketts said after the match. “Just getting that monkey off our back, so to speak.”