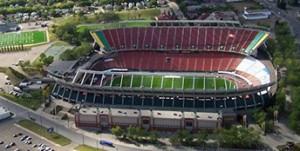 The worst-kept secret in domestic soccer was confirmed Tuesday, when the Canadian Soccer Association announced that it has booked a friendly against Costa Rica for May 28 at Commonwealth Stadium.

This has been on the radar since the middle of March: FIFA posted the match on its international calendar and the Costa Rican federation announced the game officially, then retracted it. The story about an Edmonton game was confirmed on the Costa Rica Football Federation website then was taken down.

The reasons on why this game is important to Edmonton are obvious: Not only has Edmonton City Council been hesitant to green-light millions in dollars worth of renovations to Commonwealth Stadium ahead of the Women’s World Cup, but that same council has also told FC Edmonton it needs to see a surge of soccer support this season if a stadium is to be built for the NASL franchise. Of course, a Canadian men’s national team match that has good support is a very significant carrot for Mayor Stephen Mandel and his council.

But, there are two major issues here.

The first is a scheduling problem. The second leg of the Amway Canadian Championship is set for May 29. We know that when Canada plays friendlies in North America, the team is made up mainly of North American-based players. But, unless that second leg is moved, there’s a good chance that two of the Canadian teams will declare their rosters off limits. And this is especially worrying if Toronto FC, a regular supplier of players to the national team, makes it to the final.

The logical solution is for the second leg to be moved. The 11 has posed that question to the CSA, but so far hasn’t received an answer. Such a move would need the clubs to say yes, and from what we’ve heard, that question hasn’t been asked of the team presidents. (UPDATE: The CSA has stated it will not be changing the schedule of the ACC to accommodate the friendly)

The second issue is the ridiculous local kick off time. A game that has such importance to the Edmonton soccer community is scheduled to kick off on a weeknight at 6 p.m. For those who have never been to the Alberta capital, it’s actually a physically larger city than Toronto or Montreal, even though the metro population is just 1.2 million. To ask people to get off work at 5 p.m., run home, get the kids and be ready for 6 p.m. is a ridiculous thing to ask. That’s especially true considering the casual fans that the event needs to just make a dent in a stadium that looks empty when 25,000 people show up.

Whether it is for Sportsnet or Costa Rican TV, the notion of customizing kickoffs for other time zones’ TV is 1988 sort of thinking. Thanks to streaming, multiple sports channels and niche marketing, the prime times for sports have been widened.

There used to be a need for having games end at a good time so the big Eastern papers can get their material in ahead of the press deadline irrelevant. The Internet has killed that notion dead. Papers slap material up on their websites as soon as they possibly can.

As well, and anyone who has lived in both the East and West will tell you, it’s much harder to watch a sporting event that begins at 5 p.m. local time than it is to stay up out East to watch a late game out west. When you talk to Westerners, we accept that the 4 or 5 p.m NHL or weekday MLS matches don’t happen for us. You can only PVR so much. It is easier to stay up late for sports than it is to cut out of work for sports. We’d never ask CSA to schedule its BMO Field games for 10 p.m. local time because it’s more accessible for the west; but it’s OK to do it the other way around. As the West’s population growth continues to outstrip the East, that thinking has to stop.

And it’s hard to plea with the boss when the game is a friendly.