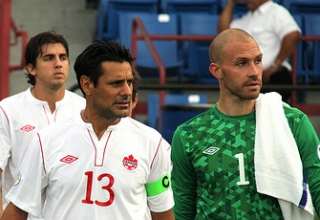 To the outsider walking past the cricket oval at the Central Broward Regional Park in Lauderhill Fla., they could have easily confused Wednesday’s Canada/Trinidad and Tobago international friendly as a high-school soccer game. With no national or FIFA anthems to introduce the players and just a scattered few in attendance, it was certainly yet another unique CONCACAF adventure with the Canadian men’s national soccer team.

All that aside, Canada overpowered Trinidad for virtually the entire game but in the end had to settle for a relatively modest 2-0 over their Caribbean foes in the first match the two sides have played since they played five times 12 years ago.

“I thought the first half we kept possession well—we moved the ball well but we really weren’t penetrating,” said head coach Stephen Hart afterwards. “We created a couple of chances but we really didn’t threaten them enough. In the second half we were far more dynamic. Our movement was better and quite frankly we should have scored more goals.”

Tosaint Ricketts had been tough to contain for Trinidad all night and was eventually rewarded in the 57th minute when he latched onto a Marcel De Jong cross from the left. Standing on the right corner of the Trinidad 18-yard box, Ricketts had time to control, find his opening and unleash a high shot for his third goal for Canada.

“They were kind of not disciplined at the back so there’s a lot of good spaces and a lot of channels that I can exploit and I got a lot of good balls in by (Marcel De Jong),” said Ricketts, who is still without a club but said he’s optimistic the ongoing issues involving him and Politehnica Timisoara in Romania will be resolved soon.

Canada’s second of the night came in the final few minutes when Russell Teibert, who was very impressive as a second half substitute, played Will Johnson through. Johnson then chipped in a cross that struck the hand of a Trinidad defender. Johnson promptly dispatched the penalty and it was then that Hart allowed a rare smile to creep across his face.

“It was hot, which was probably why it wasn’t sharp in the final third as we’d like it to be. We didn’t give away too many chances—another zero,” said Johnson. “We’ll win a lot of games from good defence so obviously we would have liked to bang a few more in but overall I don’t think we can be too disappointed with the result. We just have to recognize there’s quite a bit of room for improvement.”

The score could and perhaps should have been much higher as it was wave after wave of Canadian attack that went begging either from some last gasp defending by Trinidad, a lack of finishing by Canadians, or a mix of the two. Teibert could have had a pair as he was played in twice in a matter of minutes but missed both chances. Finishing aside, however, Teibert had a fantastic international debut with Canada. There must have been a reserve of energy after getting barely any tie with the Vancouver Whitecaps as he was one of the better creative players in the second half. It was a Teibert pass through to Johnson that led to the penalty call.

“He’s been the sharpest guy in camp by far so it’s been awesome to see the young guys coming through. I thought he did really well,” said Johnson. “He was bright. He wanted the ball and got himself in some great spots and on another night he could have had one or two.”

Wednesday also marked the return of Marcel De Jong in the second half. While Ante Jazic performed capably on the left side, De Jong’s speed added another dimension to the attack and it will be very interesting to see how a healthy De Jong will match up with Dwayne De Rosario next month on that left side of the Canadian lineup.

“He wanted to perform, he desperately wants to be back in the squad—it’s been over a year,” said Hart. “I think we’re reaching a stage where we can’t have any complacency. There’s a lot of competition for places.”

While it goes without saying that the squad that lines up against Panama twice next month will be quite a bit different, it’s certainly encouraging to see that there could be a bit of depth in Canada after all.