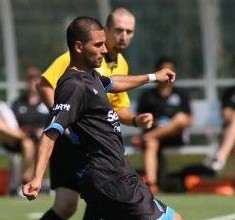 Kenny Caceros: Out this weekend

Heading into what is the team’s biggest game of the NASL season so far, FC Edmonton’s practice was as notable for who was sitting out with injuries as who was actually on the field working out.

The team flies out Wednesday night, and there are question marks around a variety of positions on the field:

• Shaun Saiko, FCE’s leading scorer — and scorer of the winning goal Sunday against Puerto Rico — was out with a bad knee. He came out of that game with the knee problem late in the second half. He said that he is a maybe for the game — but if this was earlier in the season, he’d definitely be out. Because Saturday’s match against the RailHawks is a key six-pointer, with the Eddies trailing Carolina by four points for the final playoff spot, that’s the reason Saiko is still entertaining the notion that he could play.

• Striker Yashir Pinto did not train because of a bad leg.

• Midfielder Kenny Caceros, who suffered a charley horse Sunday after colliding with Islanders’ midfielder Para Pantazopoulos. Even though Caceros stayed in long enough to set up Saiko’s goal, he had to come out. He will definitely miss the Carolina trip. “If I would have had a couple of days more to recover, I would have been fine,” Caceros said.

• Defender Jonathan-Joseph Augustin continues to be out with a hamstring problem.

• And, at the end of practice, the team gathered around to hear midfielder Ilja Van Leerdam announce that he will be flying home to the Netherlands for surgery on his knee. The Dutch veteran said that, if the team is still in the playoff chase, he will try and return within three to four weeks so he can still help the club. “I’m not a young man anymore,” he said. “But I still feel I am fit.” Van Leerdam found that he could get the surgery done earlier in Eindhoven than if he stayed in Alberta, so he took the option to go home and get it done as quickly as possible.

Of course, with so many players iffy or unavailable for this weekend’s massive game, there is cause for concern. But the Eddies players who will be on the plane when it leaves tonight said that injuries are no excuse.

“We just played three games in eight days, and that takes a toll on the body,” said right back Antonio Rago, whose play has stood out over the past two matches — as he’s been dominant down the wing and in the back. “But we have a deep squad. We have 25 guys on the roster who can play. We are going to bring a full squad on the trip with us. So we can’t use injuries as an excuse.”

One player who will be on the plane is Paul Hamilton, who was held out Sunday because of a head injury suffered in a late head-to-head challenge on Minnesota’s Geison Moura the weekend before that. Hamilton has missed the last two matches because of the red-card suspension and the head injury. But, he has been cleared and can play Saturday.

“These things are going to happen at the end of the season,” Hamilton said. “There are going to be lots of bumps and bruises. Hopefully the guys who are out of the lineup won’t be out too long.”

And while the upcoming match is big, Rago wouldn’t say that it’s in the do-or-die category. That’s because Carolina’s season-ending run-in is brutal. It has five games left against the top three teams in the league. Edmonton is done with the likes of Puerto Rico and San Antonio.

“I looked at their schedule and they have two left against San Antonio, two more against Tampa Bay and they have to go to Puerto Rico,” said Rago. “And Carolina isn’t the onlty team we are chasing; we are six points behind Minnesota and we play them twice. So, it’s not over if we don’t get a win in Carolina. But, really, with the schedule, it’s all in our hands. And if we don’t make the playoffs, it’s all on us.”