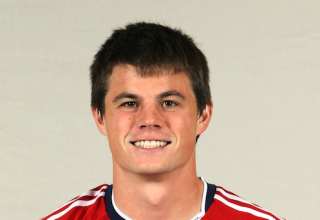 Chivas USA sent a message to the rest of Major League Soccer on Sunday, beating the Red Bulls 3-2 in New Jersey. And, Justin Braun, who scored all three goals for the Goats, was named the MLS Player of the Week after all of the votes made by the North American Soccer Reporters were tallied.

Braun got goals two and three from close range, but the opening goal of the match will go up for Goal of the Week consideration. Braun cut in from the left channel, strode to the top of the penalty area and smacked a shot over Red Bulls’ keeper Bouna Coundoul.

Chivas, which finished last in the West in 2010, has lost just one of its last five games as new coach Robin Fraser tries to rebuild the franchise. It’s another reminder of just how quickly a team can rebuild in an MLS where parity reigns — outside of Real Salt Lake, that is — and the low salary cap works as a heck of a playing field leveler.

How The 11 voted: Braun’s three-goal performance on Sunday night was all the more impressive because he did it at Red Bull Arena. Each time New York came back to equalize, Braun struck again. And, his night usurped former Toronto FC star Dwayne De Rosario, who scored his first goal as a Red Bull by slamming a penalty kick into the top corner to tie the game 2-2.

The second-place vote went to another former Toronto FC player. Chad Barrett didn’t score in the Los Angeles Galaxy’s 4-1 win over Sporting Kansas City, but he was directly responsible for goals scored by Landon Donovan and Juan Pablo Angel. He sprung Donovan free with a great pass that split the SKC defence, and he nodded a perfect headed pass for Angel to run on to for his goal. Barrett created numerous opportunities in the game and, though the big three of Donovan, Angel and David Beckham got the headlines, Barrett was the most impressive Galaxy man on the night.