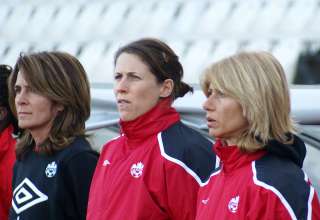 Canada’s national women’s team drew Switzerland 1-1 in a World Cup warmup match Sunday at the Mancini Park Hotel in Rome. But you’d need to be a decent detective to find out about the game — or be fluent in German.

Only the Swiss federation put up a match summary on its site (in German). The Canadian Soccer Association had match stats up, but no report of any kind.

Caroline Abbe opened the scoring for the Swiss side, heading home a corner past Canadian keeper Erin McLeod off a corner from Martina Moser.

Canada struck the crossbar twice, but it was Kaylyn Kyle who got the equalizer midway through the second half.

“The result is good. We are satisfied,” Swiss coach Beatrice von Siebenthal was quoted after the game on the federation’s website.

According to the Swiss federation, “The match was held at the request of Canada held behind closed doors.” Now, we knew that coach Carolina Morace wanted to keep her team’s preparation quiet and that the game would be played without spectators.

But, the Canadian Soccer Association needs to promote the women’s team. They have played a huge number of friendlies and tournaments in the last year, but those have all been on foreign soil. So, as successful as they have been, they haven’t had some home-field successes to get the Canadian media interested in this team. Let’s face it, the biggest headlines they made came when the team threatened to boycott games in a show of support for Morace. That meant more to the team’s coverage than winning the Gold Cup or the Cyprus Cup.

With just more than a month to go before CBC telecasts Canada’s Women’s World Cup opener against Germany, the team isn’t making the news on even an occasional basis.

Morace has the team in Italy; I can’t see how a little coverage back in Canada would be that much of a distraction.

The women have long pushed to receive what they feel is their fair share of funding from the Canadian Soccer Association. They want to be treated on an even playing field as the men. Well, whether it’s the CSA or Morace, the veil of secrecy on the team needs to be lifted. This next month is the perfect time to promote women’s soccer in Canada.

Canadian fans shouldn’t have to use Google Translate on the Swiss federation’s site to figure out what their national team is doing just a month out from the World Cup.