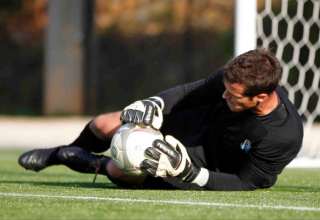 Parker has been a revelation for FC Edmonton since he took over in goal from Rein Baart three matches ago. He has started the last two NASL matches for FC Edmonton and the second leg of the Nutrilite Canadian Championship semifinal, allowing just two goals in that stretch, and making a series of highlight-reel saves.

Parker got the nod this week for a series of saves he made against FC Tampa Bay in a 1-1 draw. The best of the bunch was a point-blank stop on FCTB striker Pascal Millien to keep the score at 1-0, setting up Chris Kooy’s stoppage-time equalizer.

Despite Parker’s strong play and the fact he has MLS experience with Chivas USA, FCE’s coaching staff has yet to publicly coronate him the team’s No. 1 keeper. After the draw with FCTB, assistant coach Dave Randall said the team will use the off week to see where its goaltending situation stands, and that no one has the No. 1 job at the moment.

That being said, FC Edmonton fans would faint if Parker wasn’t to get the start Monday at home to NSC Minnesota Stars.

Veteran Dutch keeper Baart struggled in his last three starts, allowing a weak goal to Carolina after he came out of his area and misplayed a header, passing a ball directly to the feet of Toronto FC striker Maicon Santos in the first leg of the NCC semifinal, and then being sent off in a 5-0 loss to Montreal in which he looked shaky throughout, with several miskicks and misjudgments of long balls into the penalty area.

Etienne Barbara, who already has nine goals and has scored in every game in which he’s appeared this season, was named the NASL’s Offensive Player of the Week. Really, the way Barbara is playing right now, it will be news when he doesn’t win that weekly award. Barbara got two more goals as is Carolina RailHawks went to Montreal and beat the Impact 2-1.