January 28, 2022
9 New Articles
Home Global Game CONCACAF Bernier: Canada “should have never been like this” in Panama rematch 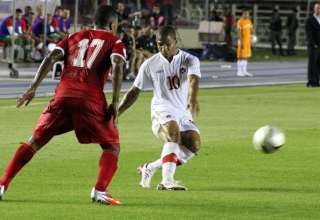 Panamanian supporters wasted quite a lot of beer Tuesday night but they didn’t care one bit.

The hometown fans reacted the same way on both occasions as their team scored their goals against a Canadian team that was on the back foot right from the start. Each time the ball crossed the line and into the Canadian goal, they would throw their hands up in celebration, throwing whatever they had (in most cases, beer) into the air.

They were treated to a dominating performance by their team as Canada wilted under humid conditions in Panama. It wasn’t particularly hot but as the old saying goes, “it’s not the heat that’ll kill you—it’s the humidity.”

“We should have never been like this, at least from the get-go,” said midfielder Patrice Bernier after the 2-0 loss. “You can understand it during the game to lose momentum or be tired but I think in a game like this we should be ready from the get-go and give them more of a battle.”

The Canadians knew the Panamanians would press right from the start — and that’s exactly what they did. Canada looked a step behind right from the start. It could have been a blessing in disguise when the lights went out and Canada had almost 15 minutes to figure things out.

But when Dwayne De Rosario had to be substituted after sustaining a knee injury in a challenge with Felipe Baloy, things really started to spiral downward. Canada switched from the 4-4-2 formation that it started with to more of a 4-5-1 and never really got on track.

Defending has been Canada’s strong suit throughout its World Cup qualifying campaign thus far. While the finishing has been suspect for Canada in every game in this round, the team could always count on quality defending. That wasn’t the case on Tuesday as it appeared Canada was taking a zone defence approach on the corner kick in the 38th minute that Rolando Blackburn headed home to trigger the first deluge of beer in the stands.

And, while Canada looked to settle down at the start of the second half, getting back-to-back corners in the opening minutes, it was another defensive miscue that let them down. First David Edgar was soundly beaten by Alberto Quintero after Edgar lunged in with a sliding tackle. Quintero was in space on the left side and all keeper Lars Hirschfeld could do was close down the angle and hope his defenders could get in the way of any cross that Quintero put in. That didn’t happen as FC Dallas forward Blas Perez was first one it to get Panama’s second and triggered the second beer downpour.

“I think we’ve defended really well as a team. Today we didn’t do that,” said captain Kevin McKenna, who got his head wrapped after a clash of heads on the corner kick where Panama got its first. “We know we were getting pulled out of position and they watched the tape and they saw the way we play and they exploited those situations and they were better than us.”

It is now officially gut-check time for the Canadian men’s national team. The two games in October will determine whether or not that seven points in three games is put to waste. It’s time for the players to prove that the team that delivered one poor result here in Panama is an aberration and the one that’s been the better squad in the three previous games is the real team Canada.