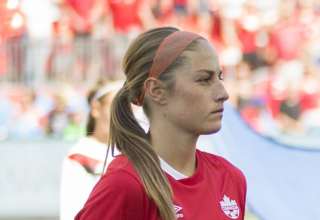 Janine Beckie’s 94th-minute chip-shot goal gave Canada a 1-0 win, but the truth is, the Canadians deserved to win by more. Just like how Brazil deserved better than a 2-0 scoreline on the weekend, on Tuesday the Canadians didn’t deserve to have to wait till the end to get the result.

In fact, Beckie’s chip shot over Luciana, the Brazilian keeper who had just come in for the injured Barbara, made up for an earlier chance that was squandered. Just minutes before she scored the winner, Beckie was sent thanks to a wonderful pass from Sophie Schmidt. But, with the net right there in front of her, Beckie scuffed a shot right towards Barbara.

But it was good to see a striker who misses a clear chance pick herself up, get on with it, and then score on what was actually a more difficult opportunity to convert than than the one she’d slipped up on in the first place.

Really, though, Canada should have had the lead early on and been able to build on it. In the first half, Schmidt had a wonderful opportunity in the box, her effort hit teammate Kadeisha Buchanan in the Brazilian penalty area and the ball flashed over the bar.

Then, Deanne Rose broke in, and had her shot saved by Barbara. The rebound fell right to Diana Matheson, who looked to have an open goal at her mercy. But Bruna Benites slid in and blocked the shot off the line.

Matheson had another glorious chance when she was sent in thanks to a lovely ball from Christine Sinclair. But Barbara charged off her line and bodychecked Matheson outside the penalty area — but the contact was made well after the Canadian’s chipped effort was sent on its path away from goal. So Barbara only saw yellow, and was in goal to make a diving stop on the ensuing free kick from Sinclair.

Coach John Herdman decided to use Beckie as a super sub, and added veteran fullback Rhian Wilkinson and teenage midfielder Jessie Fleming to the starting XI. Brazil left Marta on the bench for most of the bench, allowing the visitors the built-in excuse of not starting their “A” lineup.

Still, as much as Saturday’s loss was disheartening, Tuesday’s win will leave us all feeling a heck of a lot better about the women’s team. But, there will come a time at the 2016 Olympics when this team will need to score more than once to get a result — and the forwards need to be more clinical in front of goal.