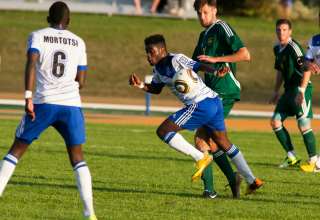 Allan Zebie didn’t take the most direct route to an FC Edmonton contract. But he got there.

On Thursday, the Eddies announced that the France-born, Canada-raised fullback — who played with Canada’s U-20 side in 2013 — has been signed. Zebie, now 21, joined the FCE Academy in 2012 but left to explore options in Europe. He had trials with Rangers, a club that once employed FCE coach Colin Miller (and is still close to his heart) and Leeds United. In 2014, Zebie returned to Edmonton and spent much of the season training with the Eddies.

Zebie said he only spent a week at Leeds, but had a positive first three days with Rangers. And then Murphy’s Law came into play.

“I was supposed to be there for a week, I was there, Monday, Tuesday, Wednesday, then they asked me if I could stay another week. But then I got injured.”

Zebie hoped to get back to Rangers once he got healthy, but a deal never worked out.

In 2014, he joined the Eddies when they in their mid-season camp in Vancouver, then spent the next few months training with the first team. He impressed enough to earn himself the contract.

Zebie said that he can play on either the left or right side.

FCE assistant coach Jeff Paulus said that many of the first-team players would say tha Zebie was one of the hardest players to beat one-vs-one in the training session.

“He’s a very difficult player to beat one-vs-one and he works extremely hard,” said Paulus. “He’s not a flashy player, but he plays a clean ball out and can get forward when the opportunity’s there.”

Allan’s younger brother, Bruno, is with the FCE Academy, but Paulus said there have been some discussion about seeing if there is a way the Eddies can loan him out to a USL-PRO or PDL team, so he can see some higher-quality game minutes. Paulus said the club has an excellent relationship with Calgary Foothills, which will begin PDL play in 2015. If Foothills’ status will allow it to take on pro players, then it could be a destination for some of the Eddies’ young first-team players who need minutes.

Paulus said it could be a great opportunity for the Eddies if they could place some players on the Vancouver Whitecaps’ newly minted USL-PRO squad. But there have been no discussions between the clubs on that level.