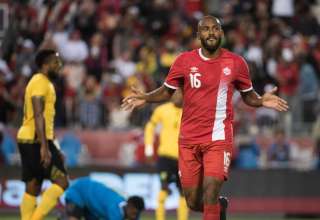 Well, you have to thank coach Octavio Zambrano for going with Anthony Jackson-Hamel as Canada’s striker in the first half of Saturday’s friendly against Jamaica, and then going with Cyle Larin in the second half.

By giving each player 45 minutes at BMO Field, Zambrano gave the critics and the pundits a perfect opportunity to compare and contrast Canada’s two main striking options.

In his half of work, AJH continued the narrative from his MLS season with the Montreal Impact; that he can make major hay out of minimum minutes. He scored and set up a goal, as Canada won 2-0.

AJH made clever runs away from the ball, and was dangerous throughout his 45 minutes. In just 588 minutes of action with the Montreal Impact this season, he has seven goals. That’s a return rate of better than a goal per 90 minutes.

The first goal was served up on a platter. Jamaican defender Jermaine Taylor put the ball right on the foot of Canadian winger Junior Hoilett. Then, Hoilett put the ball into the box for Jackson-Hamel to tap into the goal.

It looked easy, but credit to the Canadian striker for recognizing the chance was coming after the giveaway, and getting into the right spot for Hoilett to find him.

The second goal was sublime. After a good spell of possession from Atiba Hutchinson, the ball went to Samuel Piette — who played one of his best games in a Canada shirt. Piette then played the ball to Jackson-Hamel who, with his back to goal, recognized that Jonathan Osorio was in prime position to make a break. AJH back-heeled the ball into Osorio’s path, and the Toronto FC midfielder doubled Canada’s lead.

Minutes after Larin came in, he also got a gift-wrapped chance thanks to a Hoilett cross; but, as has been the unfortunate pattern with Larin in Canada’s matches, a good chance didn’t even result in a shot on goal. The ball was skied over the net.

Through the rest of the half, we saw Hoilett and Raheem Edwards on the other wing take low-percentage shots rather than play the ball forward for Larin, who simply wasn’t making the same incisive runs as Jackson-Hamel. Actions do speak louder than words, and judging by the actions of his teammates, the trust level for Larin isn’t the same as it is when AJH is at the top of the attack.

Larin also was slow in his off-the ball runs; there were a couple of attacks where Hoilett looked to Larin, but the forward simply couldn’t time his run or shake a defender.

When they play for Canada, it looks like AJH is the player linked with big-money moves to Europe, and Larin is the one struggling to get minutes with his MLS side. Funny, that.

Yes, it can be argued that Larin had the disadvantage of playing on a Canadian side that was reduced to 10 men after Alphonso Davies, who had just come on as a sub, kicked Damion Lowe in the face after the two had gone to ground.

With the Gold Cup down and World Cup qualifying for 2022 still years away, there’s plenty of time for Zambrano to try and come up with his depth chart for when the games actually matter again. So, at this stage, no one is going to win or lose a job. But, for now, we have to say that Canada looks much better going forward when Jackson Hamel is the man leading the charge.