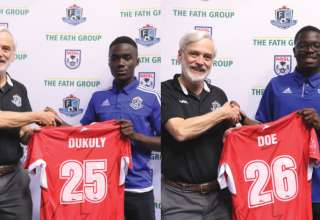 Teenagers David Doe and Abraham Dukuly are the latest to make the jumps from FC Edmonton’s Academy to professional contracts.

The players were signed Monday by FC Edmonton, but the deals were not announced until Wednesday afternoon because the contracts took time to be cleared by NASL’s head office.

Dukuly, an attacking midfielder, was one of FC Edmonton Academy-laden Team Alberta’s best players at the recent Canada Games. Doe is a striker with pace.

“They are now in a fantastic environment everyday, a very challenging environment,” said FCE coach Colin Miller. “It’ll be about consistency in the training sessions.Can they consistently do well every day in training? And, when they are having a down spell, how quickly can they recover from that? Player development is all about consistency and these young players have come in and done very well, so far.”

The two have been training with FC for the past month, and Miller complimented the “enthusiasm and energy” Dukuly and Doe have already brought to the first team.

He said that, years ago, the coaching staff saw Dukuly and “recognized the talent the boy had at a very young age.”

“It was on and off for my whole academy year,” said Dukuly. ”That was my goal [making the FCE roster] at the beginning, when I was in Grade 9. I’m going into Grade 12, now. I feel like confidence was the key. And then I performed in the Summer Games, which is the biggest youth tournament you can be in here in Canada.

Of course, it helped that Jeff Paulus, who runs FCE’s Academy and serves as first-team assistant coach, was the man pulling the strings for Team Alberta, as well.

“Jeff lets me express myself, do what I can, because he believes in me,” said Dukuly.

And how does he describe his game?

“I’m flair. I like to take on players one v one. If I can isolate you one v one, I will. And I’m technical at times, too, and I can use my pace when I need it.”

Doe recalled how he felt when he got the offer.

“I knew two weeks ago, when I got home from practice,” Doe said. “Jeff asked me, ‘how do you feel about a first-team contract?’ And I was pretty excited, my whole family was excited for me.”

Doe played under coach Paul Stalteri at Canadian U-17 evaluation camps in 2016. He knows he’ll have to be patient for his chance to come with FC Edmonton’s first team. But he’s anxious for the chance to step up.

“When the other players don’t perform as good, and the coach needs someone to step up and perform, I’ll be there.”