July 06, 2022
9 New Articles
Home NASL & USL FC Edmonton Surreal own goal from NCFC’s keeper allows Eddies to get a draw on the road 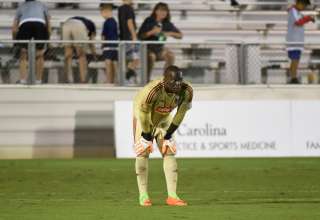 The North American Soccer League is continually looking for ways to bring more exposure to the league.

Well, North Carolina FC keeper Brian Sylvestre’s own goal on Saturday night will get the NASL that exposure. It’s going to find its way onto blooper reels on sportscasts around the world. It’s that, well, odd. Sylvestre’s gaffe allowed FC Edmonton to get a 1-1 tie in Cary, N.C.

In the second half, NCFC defender Christian Ibeagha headed the ball back towards Sylvestre. Because it was headed back, and not played back by the feet of the defender, Sylvestre was able to pick up the bouncing ball. But he chose not to, and the ball bounced over his outstretched foot and skipped through his legs. The ball wasn’t rolling all that fast, and Sylvestre may have had time to dive backwards and swipe the ball away. Instead, he chose to stay on his feet and try to get around the back side of the ball. He didn’t get there in time, the ball inched over the goal line and, then, with the cause already lost, Sylvestre tried to dive and knock it away.

“I don’t think that things could have gone any worse for the goalkeeper,” said Eddies coach Colin Miller.

But, Miller, who worked with Sylvestre when both of them were with the Vancouver Whitecaps, left it right there. It’s one of those situations where a team is happy to get the goal, but you can still feel bad for the victim.

“Brian is having a hell of a season,” Miller said.

And, right after the match ended, the cameras showed FCE veteran Daryl Fordyce going over to Sylvestre and giving the keeper an embrace.

It also topped off a busy night for Ibeagha, who scored off a corner early in the match, then, off an FCE corner, headed a ball off his own crossbar. NCFC was just inches away from giving away two own goals on the night.

Miller was happy to come away with North Carolina with a point, but he also believed his team deserved more. Jake Keegan had a header go off the bar, and Tomi Ameobi missed the net after Sylvestre spilled a rebound in the penalty area.

“I thought that was our best football that we have played in a very long time,” said Miller.

While NCFC took the early lead and had the bulk of the play in the first 10 minutes, the Eddies gained momentum as the game went on.

“A lot of their attacking play came from us giving the ball away needlessly,” said Miller.

But Miller felt that the Eddies should have had more than the own goal, and he wants his players to be more selfish when they have clear looks at goal. Too often, he feels his players are looking to make the perfect pass, rather than shooting and seeing the kind of havoc in can create in the box. If a shot is on target, if it doesn’t go in, it can cause a rebound that leads to a free-for-all in the box. And that’s a good thing for the attacking team.