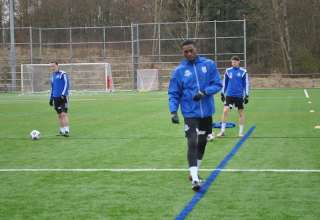 Tomi Ameobi trains with the Eddies in Vancouver.

The middle of the three soccer-playing Ameobi brothers, Tomi, has decided to try and take his game across the pond. He is expected to get minutes on Wednesday, as FC Edmonton faces Trinity Western University in a friendly in Langley, B.C.

Ameobi joined the Eddies on trial on Tuesday, as the club shifts its NASL preseason training to Vancouver. Tomi Ameobi most recently played with VPS of the Finnish League, where he scored nine times in 2013. He’s also played for Icelandic sides Grindavik and BI/Bolungarvik.

Ameobi is yet another player who could fit into an Edmonton side that is on the hunt for attackers; so far, strikers Horace James and Frank Jonke have been added to an attack which finished dead last in NASL in scoring last season.