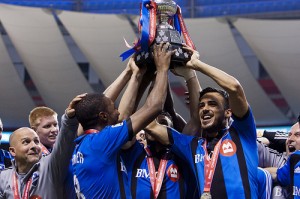 If you’re a fan of FC Edmonton or Ottawa Fury, the Canadian Soccer Association’s announcement of the coming scheduling changes to the Voyageurs’ Cup may have you slightly perturbed. Or angry. Or furious.

That’s because, to accommodate the change to a new summer schedule for the Voyageurs’ Cup, no NASL team will be able to try and qualify for the 2015-16 CONCACAF Champions League.

But you shouldn’t be angry. Anything but. Really, the new scenario is the best thing the NASL teams could have asked for.

OK, let’s backtrack to the announcement made earlier Friday. To try and make more the Amway Canadian Championship — which has been plagued by poor ratings and terrible gates as it went head-to-head with the NHL playoffs — more fan-friendly, the CSA is moving the tournament to the summer, starting next year.

This year’s tournament, which begins April 23 with the first of a play-in two-game series between FC Edmonton and Ottawa, will go ahead as normal. The winner of the five-team tourney gets the Canadian spot in the upcoming CONCACAF Champions League.

The plan is to then move the tournament to June and July dates in the years to come. As a rule, a winner will be chosen in time for the CCL. But, that can’t happen in 2015; because of the Women’s World Cup and the Gold Cup, the Voyageurs’ Cup won’t be finished till August. That will be too late to send the winer to the CCL. So, for 2015 only, the spot will go the highest-ranked Canadian team in MLS, what the CSA calls “the combined league points table at the end of the 2014/2015 regular MLS season.”

That in itself is confusing. But, in a nutshell, it’s business as usual this year. Then, next year, the Canadian CCL spot is only open to one of the three Canadian MLS teams. Then, in 2016 and on, it’s a summer sked that will ensure a fair shot for all the pro teams.

So what if the 2015 Voyageurs’ Cup is a lame-duck tournament? For NASL teams, it’s a small price to pay.

You see, as it has been the last few years, the tournament usually begins in mid- to late-April. The MLS teams have been playing league games since March. The NASL teams haven’t. In fact, it was normal to see FC Edmonton to play a home Voyageurs’ Cup match before the Eddies played an NASL match at home. The MLS teams were already in rhythm; the NASL clubs were finding their legs.

Now, the shift sees the tables turned. The NASL practice is to take a summer break. That means FC Edmonton and Ottawa won’t have league games in July; they’ll be fresh, coming off the spring season. Meanwhile, MLS often has its heaviest part of the schedule in July; not only is the league slate full, but there are the European friendlies and the addition of the All-Star Game for the elite players. MLS supporters already complain about the cramped summer schedule.

So, theoretically, Vancouver would face Edmonton in July; Edmonton would have the time off, and not have to rotate players. The Eddies’ players would still be in game shape from the spring season. Meanwhile, Vancouver may have to go east to play in Chicago or New York or Toronto, then head to Edmonton, then back to Vancouver for a league game or maybe a friendly against some European team or both, then home to Edmonton then maybe off to altitude to play Real Salt Lake or Colorado.The Whitecaps would have a squad-rotation nightmare.

Yup, the NASL teams will have huge equalizers.

And even if NASL abandons the summer break, there’s no way the NASL schedule in July will be as busy as it would in MLS.

In the long run, in terms of competitive balance, a summer tournament offers a huge disadvantage for the MLS teams. But, let’s face it; NASL is still interested in further Canadian expansion, if the league finds the right dance partners. MLS has said that all of its expansion targets are in the United States. So, if more teams are to join the Voyageurs’ Cup, NASL is the far more likely choice to be the league that provides them. So why not go to a schedule that’s far more friendly to NASL?

If NASL does keep the split schedule for years to come, the new tourney sked allows FC Edmonton and Ottawa — and any future expansion team — to have some continuity in their schedules. They won’t fade from the minds of sports fans in July. They’ll still have games.

Soccer in the heat of July sucks; the pace is slow, the game is more calculated in the taxing conditions. But the empty seats in April, and no mainstream TV presence because of the NHL playoffs, sucks even harder.