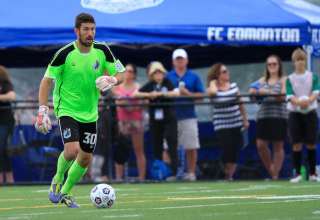 FC Edmonton keeper John Smits won the NASL Golden Glove award by posting a league-best 0.90 goals against average. He finished just slightly ahead of Minnesota United’s Matt Van Oekel, who came in with a 0.95 GAA for the league’s best team over the course of the combined spring and fall seasons.

Now, the two are teammates. On Thursday, the Eddies announced the acquisition of Van Oekel.

The Eddies also have Canadian keepers Tyson Farago, who earned a team-of-the-week nomination when he made his lone start in the final week of the season. Christian Kaiswatum, promoted from the academy ranks in 2014, is the fourth keeper.

With Smits and Van Oekel in the fold, FCE has clearly put itself way ahead of the NASL pack when it comes to goalkeeping depth. This is one department where Edmonton ranks at the top of the league.

“He is arguably the best goalkeeper in the North American Soccer League (NASL),” FC Edmonton coach Colin Miller said in a release. “This is also a great signing for John Smits, Tyson Farago and Christian Kaiswatum — they will be able to work with someone who is experienced and knows the league very well. The competition for places also really heats up with his addition. I’m very excited about Matt’s decision to come to Edmonton.”

Van Oekel said that Miller called him just three days after the NASL season ended. The deal was signed two weeks ago, but wasn’t made official until Thursday.

“Colin Miller was the key,” said Van Oekel. “He called me very early into my free agency, and he really sold me on the situation.”

And, Edmonton’s scheduling was also attractive to Van Oekel. Teams that play day games in NASL are rare; Saturday night games are the norm for most of the clubs. But FC Edmonton plays its home dates on Sunday afternoons. The lack of local TV availability on Saturday nights plays into that (hockey rules Saturday nights until the Stanley Cup playoffs wrap up in early, no, mid-June).

But Van Oekel prefers to play when the sun is up and the floodlights are off.

“I’ve always enjoyed coming up to Edmonton. I really enjoy the facilities there, and I also really like to play day games.”

He made his professional debut in a day game (in Montreal). So the 2 p.m. Sunday kickoffs will be welcomed by the Eddies’ newest signing.

Van Oekel will arrive in early February for training camp.