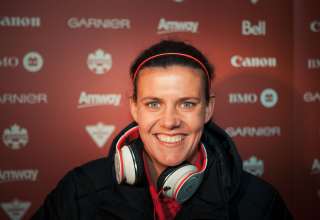 She’s Canada’s all-time leading scorer, but she only scored once for the national team in 2014.

But the drop-off in goal production didn’t stop Christine Sinclair from being named the Women’s National Player for the 11th straight year. You’d have to go back to 2003 to find someone else other than Sinclair (Charmaine Hooper, for the trivia buffs) who has won the award.

Sinclair also scored seven times for the Portland Thorns of the NWSL.

While she said that the drop-off in scoring has weighed on her mind, Sinclair insisted that she’s become “a more complete soccer player” under the tutelage of coach John Herdman. She said that she’s become more of a leader on the team, and she’s also been asked to perform other tasks than simply go up top and score goals. She’s been asked to drop into a midfield role on occasion.

Still, with so many great performances from keeper Erin McLeod — who finished second in the voting — the 11th straight Sinclair will likely be the most hotly debated amongst Canadian soccer supporters. And that’s a good thing.

“For me, I’ve always been known as a goal-scorer, and I hadn’t scored as many as I had in the past,” Sinclair said Thursday. “So that weighed on me.”

Sinclair and the national side are preparing for the Women’s World Cup. But, after the tourney — will Sinclair take a break? Not likely. She said that qualification for the 2016 Rio Olympics comes right on the heels of the WWC. And she wants to get back to playing for the Thorns.