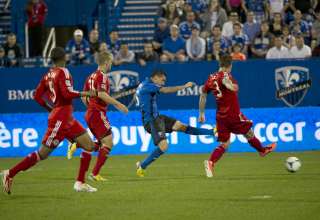 But, after Saturday’s uninspired, dull 2-0 loss to the New England Revolution, a team which averaged less than a goal per game coming into the match, it’s fair to ask this question. Is the Toronto FC of 2013 actually worse than the team of 2012?

Last season, TFC finished with 23 points in 34 games; 30 points out of the fifth and final playoff spot in the Eastern Conference. How could this team be worse? Well, this version of TFC, now winless in 10, has just seven points through 12 games. Pro-rated over a 34-game season… it’s ugly. It would put TFC on a pace for just 20 points, three LESS than last season.

Fans can point to the promises of big moves in the summer, something both general manager Kevin Payne and coach Ryan Nelsen have talked about to the point of exhaustion. But, by the time those players arrive, a fifth-place finish in the East may be an impossible dream.

And, with each loss, the sell job gets a little harder. If you’re a foreign player with DP aspirations, is the team with just one win in 12 games all that attractive? As well, TFC supporters are both wary and weary of promises of star players to come. They’ve lived through Mo Johnston’s scouting missions to South America, John Carver’s temper tantrums, Aron Winter’s stubborn inflexibility and Paul Mariner’s proclamations of depth players as the best things to ever happen to MLS. Payne and Nelsen have inherited posts filled with deep mistrust. And, right now, they aren’t making a convincing argument that anything has truly changed.

Unless, of course, if you look at the numbers. And the fact is, that after 12 games, the 2013 team is lagging BEHIND the 2012 team. The only, and make this clear, only excuse is that Danny Koevermans, the most efficient striker in TFC history, is still out of the lineup.

At least last year, despite that losing streak and being out of the playoff race by early summer, there was the CONCACAF Champions League. This year, not even an Amway Canadian Championship finals appearance.

Let’s be absolutely frank. A matchup between TFC and New England on a rainy Massachusetts evening is about as low-profile a match as MLS can put in front of its fans. These are the two most unexciting teams in MLS to watch. This was never going to be a spectacle.

But, even against a team so offensively timid as New England, TFC bunkered as if it was playing Bayern Munich. Striker Robert Earnshaw was, isolated on the top of the formation. Jeremy Brockie, still fresh from the A-League, showed some industry and effort playing just behind Earnshaw, shifting to the left and right sides, but it was sorta like watching someone run into a wall over and over. He’d try and make a play, find himself surrounded by blue shirts, and there was simply no hope to put the ball in a dangerous area.

And what happens when a team shows no industry going forward? The opposition becomes more brave in attack. Holding players move forward, realizing there’s no one to mark. Fullbacks make riskier runs forward. And, eventually, even a team with as poor a scoring record as New England will find a way to create chances. When there’s not even a risk of push-back, why not be more daring with your attack? That’s what the Revs did.

The opening goal came off a terrible decision by TFC DP Matias Laba to make a blind one-touch pass to Brockie deep in his own half. He didn’t see that Brockie was covered. Chris Tierney stole the ball, dashed down the left side, and delivered a far post-cross that Diego Fagundez volleyed home. The goal was a beauty, but it was created because Laba, who needs to be a calming influence in the middle, made a panicked play.

TFC did try to challenge higher up the pitch in the second half, and were able to at least force New England back into its own side of the pitch from about the 45th to the 60th minute. But, speaking to a lack of cohesion and, truly, a lack of talent, that pressure offered nothing in terms of a decent chance on goal. And New England’s Lee Nguyen then changed the tone of the game when he rang a 20-yard drive off the bar.

TFC gave up the insurance goal in injury time. Off a simple throw in, Revs striker Saer Sene got the ball behind two TFC defenders, then nutmegged centre back Steven Caldwell at the touch line. Then it was a simple pass for Juan Agudelo to ram home.

The Reds finally created a point-blank scoring chance in the 94th minute, but Jeremy Hall blasted wide. But the fact that Hall missed the shot wasn’t as troubling as the fact that it took so long for the Reds to actually have a chance worth lamenting.