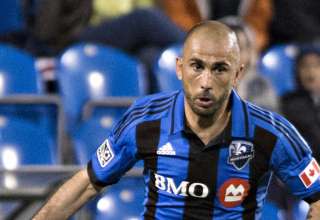 When you give up three goals to a team with a winning road record, odds are, you’re going to lose the game. The Montreal Impact beat the odds this evening, defeating the much-improved Philadelphia Union by a 5-3 score while extending its season-long unbeaten streak at Saputo Stadium to five wins and a draw.

Carrying the play all night, the Impact accrued 20 attempts on the Union net, nine of them on target compared to Philly’s dozen, of which only four found the mark. Montreal also won close to 60 per cent of the duels in the first 45 minutes of play and well over half of them in the second.

The Impact struck first, potting its first in the second minute, the earliest the team has soiled the score sheet since joining MLS. Justin Mapp was at the origin of the play that saw him relay the ball to Andrew Wenger who set up Marco Di Vaio for the first of his three on the night.

Philadelphia’s Jack McInerney, the leading MLS marksman, came into the game with eight goals to his credit and added a ninth in the fifth minute. Left virtually unmarked in close, his marker came on passes from Michael Farfan and Sheanon Williams and was virtually a mirror image of the Di Vaio goal.

It was also the signal for defender Jeb Brovsky to divest himself of the facial protection he donned for his nose, broken in six places last game and repaired surgically with the aid of a metal pin.

“After the first goal, that half clearance, I looked down and, not to blame the mask at all, I’d rather break my nose seven times than clear a ball like that again so I just decided it’s my risk,” the gutsy backliner said after the match. “I was fed up and I didn’t want to put the team in harm’s way again so I decided I was done with the mask because it really didn’t help at all.”

Mapp was instrumental in the Impact’s second goal, also off Di Vaio’s boot. His long 28th-minute aerial found the Italian striker who chipped it over a sliding keeper, Zac MacMath, and into the net.

Four minutes later, Di Vaio joined McInerney atop the league scoring ladder. Midfielder Andres Romero was allowed to dribble towards the Philadelphia goal. Largely unmolested by Union defenders, he then relayed to Di Vaio at the far post and the former Serie A star completed his hat trick.

Taking a 3-1 lead into the dressing room at the interval, Montreal came back in the second half, ultimately maintaining its margin as each side potted a pair before the final whistle blew.

Wenger was a serious threat as the teams got back to work, coming close to putting a goal away in the 57th from inside six metres and again a minute later, when his attempt to bury a pass from Felipe came to naught.

Di Vaio almost tied the league record of four goals in a game in the 68th minute but was tackled close to the line.

Philly got a goal back in the 69th minute, drawing within one on a shot from distance. Antoine Hoppenot, who had subbed in for midfielder Jose Kleberson not too long before, took a shot from the right sideline that evaded Impact keeper Troy Perkins.

Five minutes later Montreal re-established its two-goal lead. A Felipe corner kick to the near post was headed into the Union net by Wenger, his first goal of the 2013 schedule earning words of appreciation from his gaffer.

“He was much stronger in the second half,” Schallibaum ventured. “Dominant and very tough in the one-on-one battles.”

Sebastien Le Toux, all but invisible in the opening half, brought the visitors within one of equalizing for a second time in the 86th minute, his low roller beating a diving Perkins and finding the mesh behind him.

Montreal’s final goal came as the final seconds of added time ticked away. Patrice Bernier, once again wearing the captain’s armband, was at the origin of a pass that made it to rookie Blake Smith, who had replaced Romero earlier in the second half. Smith’s low left-footed shot found its way into the goal behind MacMath to send the crowd home happy.

“He worked hard every time he’s been sent out there,” offered Schallibaum.”Tonight’s goal was the cherry on top of the cake. I’m very happy for him because it was really deserved.”

Montreal next takes to the pitch in Vancouver against the Whitecaps on Wednesday for the second and deciding match in the Amway Canadian Championship.

THROW-INS – Impact midfielder Sanna Nyassi has been called to duty by the Gambian national team and will be absent with leave from June 3-17. He will miss Montreal’s June 15 game in Columbus.

• As part of the Impact’s 20th anniversary celebrations, fans were treated to slices of a 16 by 8 foot birthday cake as they entered Saputo Stadium and were also treated to a CF-18 fly-by courtesy of the Canadian Forces Bagotville air base.
The Impact highlighted its 2004 second division championship season before the match got underway, with eight players from the team introduced to the crowd, including present day staffers Mauro Biello, Nick de Santis and Adam Braz.