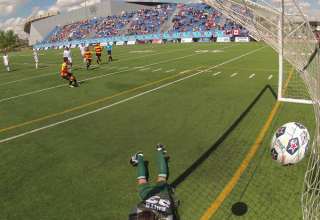 Before the match kicked off, it looked as if a perfect storm was brewing in favour of FC Edmonton; the Fort Lauderdale Strikers had left most of their “A” team players at home.

By the end of the match, it was clear that the perfect storm had reversed direction. The last-place Strikers got a goal from Carlos Salazar on their second penalty kick of the game and beat the Eddies 1-0, leaving FCE five points off the top of the NASL spring season table with just five games left to play.

Salazar’s second-half penalty was the first goal the Eddies have given up at home in NASL play this season.

The Strikers played a U.S. Open Cup game in midweek that took them through 120 minutes and penalties. The Strikers also have a USOC game Tuesday against FC Dallas. So, coach Daryl Shore left many of the regulars at home — including midfield catalyst Mark Anderson, forward David Foley, veteran defender Shavar Thomas and perennial thorn-in-Edmonton’s-side Walter Restrepo. The only regular NASL name in the lineup was keeper Jeff Attinella, who is back in the league after being loaned out by Real Salt Lake.

The national team players were in attendance ahead of Tuesday’s friendly against Costa Rica. Even Toronto FC head scout Pat Onstad was at Clarke, as a guest of the national team. And 2,387 fans were at Clarke, more than had been at the previous two matches combined.

But the game quickly turned against the Eddies. In the 16th minute, without contact, central defender Carlyle Mitchell crumpled to the ground without contact. He was in agony and rolled off the pitch. He was subbed out for Adrian LeRoy. Mitchell, on loan from the Whitecaps, will have x-rays done performed on the ankle Monday.

And that was the first domino.

Soon after LeRoy went into the game, he made an error that changed the game. He made an ill-advised headed pass back to keeper Lance Parker, that was intercepted by Strikers’ forward Stefan Dimitrov, who went down after he rounded Parker. Edmonton-based referee Sheena Dickson pointed to the spot and red-carded Parker.

Dimitrov’s ensuing penalty — a lollygagger of a shot that went right down the middle — was saved by substitute keeper John Smits.

But Edmonton was down a man, and was forced to bring out midfielder David Proctor to get Smits in the game. So, coach Colin Miller was forced to burn two subs early.

Edmonton actually got a rise from the save, and despite being down a man, were the better side for the rest of the half — even though few scoring chances were created.

“I thought we were pretty good, up to the penalty,” admitted Strikers’ coach Daryl Shore at halftime.

The second half began at a slow pace; but Shore would put striker Darnell King into the match, and he would change the same. He went up and over defender Albert Watson, making his NASL debut after missing six games with an MCL tear, and drew a second penalty — which incensed the Eddies’ players. King did what good strikers do; he leaned forward as he went towards the defender. That puts the defender in a terrible position; the attacker is going down if you make contact, or if you get out of the way.

Carlos Salazar placed his penalty just inches outside of the outstretched fingertips of Smits. It came just after Smits had robbed Dimitrov with a diving stop of a point-blank chance.

The Eddies created one chance late, but Edson Edward’s blast from the top of the box went over the bar.

After the game, Miller was cautious to be reserved in his views on the refereeing. His players had told him the contact between Parker and Dimitrov was minimal. The call on Watson was tough. Dickson gave Lance Laing a yellow later in the game for protesting a throw-in call.

“I’m (expletive) raging,” said Miller, but wouldn’t go further into why he was so angry. “But even down to 10 men, we created some chances. We just didn;t finish them and, really, we didn’t even hit the target.”

“I think we were mentally frustrated,” said Smits. “We felt like the calls were not going our way, and it felt like we were fighting the ball, too.”

NOTE: The stream of the game was unavailable to users outside of Canada on Ustream or NASL.com. According to the terms of the national TV deal FC Edmonton has with Sportsnet, a stream can’t be made available in Canada on another party’s site. The game belongs to Sportsnet. To make sure that works, Canadian viewers are supposed to be geoblocked from seeing the game on UStream or NASL.com; while the rest of the world can watch live.

It came to the broadcast crew’s attention that the geoblock wasn’t in place on Sunday — which would have allowed Canadian viewers to see the game and jeopardize the only national TV deal an NASL club has. So, the decision was made to not stream the game, to protect that national TV deal.