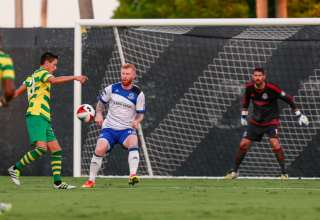 Five wins in a row. Nine home wins in a row. And, with Saturday’s 1-0 win over the Tampa Bay Rowdies on a waterlogged pitch, FC Edmonton has won two in a row on the road.

Matt Van Oekel recorded his 10th clean sheet of the season. Incredibly, he has yet to be named NASL Player of the Week. If he doesn’t get the award this week, it’s proof that those who make those decisions pick the names out of a hat — and don’t actually watch the games.

Like so many other times this year, we’ve seen the Eddies hold fast, and then score late. This time, the Eddies got a 71st-minute penalty from Daryl Fordyce, after Rowdie Darnell King was judged to have fouled Tomi Ameobi in the penalty area.

In the wake of of a team-issued video that highlighted owner Bill Edwards’ displeasure with PRO referees assigned to NASL games, the Rowdies seem to keep getting critical penalties called against them. They gave up two PKs last weekend in a loss to the Cosmos. Funny, that.

But MVO was tremendous on Saturday.

“We have got to be better defensively,” said FC Edmonton coach Colin Miller. “I don’t want big Matt to be our man of the match too many more times this season.”

Miller, though, said his team had to play in difficult conditions. The field at Al Lang Stadium doesn’t drain well, so after a torrential rain, there were spots on the field where the ball stopped dead, and some where it looked to pick up speed and skid. Basically, it was unpredictable.

“I think, after this game, after the game we just played in what has to be one of the most difficult venues in the league and the type of football Tampa plays, it speaks to everyone involved, the players and staff. I can’t say enough about the effort of the players, in this incredible heat and humidity.”

VanOekel got to work early in the game. Just two minutes off the opening kickoff, Joe Cole cut the ball into the box for Carlos Preciado, who was alone in front of goal. But VanOekel came off his line, cut off the angle, and made the stop.

Minutes later, he had to be alert to stop a backheel from Cole.

But MVO wasn’t nearly done. In the 15th minute, he made a fantastic double save, coming off his line to rob Cole, then getting over to stop the rebound attempt from Preciado.

He was in perfect position in the 27th, to handle a headed effort from Tamika Mkandawire.

As good as the double-save was, MVO may have topped it in the 59th, when he sprawled to make a stop on Preciado. For good measure, after the Eddies took the lead, Van Oekel made another diving stop, this time on Cole.

The Rowdies brought in Tom Heinemann, the man who has scored so many winning goals against the Eddies in his career; and the fact that he blasted a ball over the bar late in the match, when he was in a prime position to score — well, that’s a sign that things have changed for the Eddies.

The Eddies are home next Sunday against Puerto Rico. The team will look for its 10th win in a row at home. And, the Eddies know that all of the NASL is now looking up at them. And, with every passing week, the chance that we’ll see post-season soccer in wintry Edmonton conditions becomes more likely.

Heck, a playoff game in Edmonton might be the first time the NASL brass gets to the city this year!