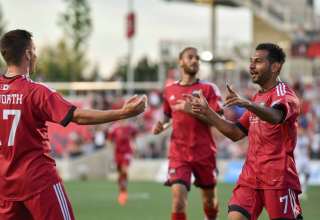 Canadians Jonathan Osorio and Jordan Hamilton each had two goals as Toronto FC beat the Montreal Impact, which played a little more than a half with 10 men, 4-2 in the first leg of their Amway Canadian Championship semifinal. Meanwhile, in the nation’s capital, the Vancouver Whitecaps dropped the first leg of their semifinal 2-0 to the Ottawa Fury. The NASL side was more than worth the margin of its victory.

You could argue that the Whitecaps transformed the first leg of the Amway Canadian Championship semifinal into something that resembled a US Open Cup match-up — that is, a USL side taking on NASL opposition. Coach Carl Robinson’s starting XI featured six players who have appeared for the USL’s VWFC2 side this season.

Yes, playing the first legs during an international week meant that the Whitecaps were without key Costa Rican and Panamanian internationals. But the Fury were also without Canadian national-teamers Julian de Guzman and Marcel de Jong.

Still, it was a chance for many of the young Whitecaps to make their cases to coach Carl Robinson. They didn’t.

Less than three minutes in, Jonny Steele got the Fury off to a dream start in front of its home fans, with a strike that found the top corner of the goal.

The Fury deserved to be up two by the 24-minute mark, but keeper Paolo Tornaghi did well to stop Rafael Alves’s open header off a set piece. Whitecaps’ fullback Fraser Aird was in Alves’s vicinity, but decided not to come close to making a challenge.

But the Whitecaps’ slack fullback play and suspect marking in the centre of the defence — evident through most of the first half — allowed the Fury to deservedly extend its lead before halftime. A cross from Onua Obasi was met by Steele; Tornaghi made a great stop, but Paulo Jr. had no problem putting home the rebound. The Whitecaps allowed not one but two Fury players to be left unmarked in the penalty area.

The second half saw a little bit of improvement for the Whitecaps, but the MLS side was still losing 50-50 balls with alarming regularity.

Cristian Techera’s header off a Sam Adekugbe cross forced Fury keeper Romuald Peiser into a decent save; but, truth be told, the ball was sent towards the middle of the goal. Even though Peiser had to leap to tip the ball over the bar, it was a save you’d expect any pro keeper to make.

The Whitecaps would need to wait till the third minute of stoppage time until another decent chance would be created. Striker Octavio Rivero, who was brought in along with Kekutah Manneh midway through the second half to bring some more MLS muscle to the team, got a great look at goal, but was thwarted by Peiser.

But, for the most part, the young Canadian who wore the Whitecaps jersey weren’t good enough. Fullback Fraser Aird was caught on the second goal and did little for his team going forward. Russell Teibert, last year’s MVP of the tournament, was most visible during a halftime TV interview. Marco Bustos was yanked in the second half after an ineffective stint in midfield.

Meanwhile, Osorio and Hamilton were holding court in Toronto.

As for the Canadian national-team players away on international duty, the Canadian Soccer Association confirmed that there is an agreement in place to ensure that they are all back with their clubs in time for them to play the second legs of the Canadian Championship semifinals.