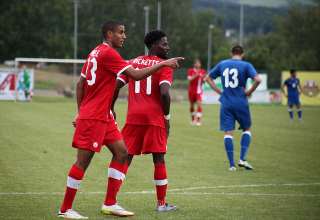 If a game goes on in the forest, does anybody hear?

For the three thousand or so watching the stream of the Canadian men’s national team’s friendly against Azerbaijan, it was 90 minutes that offered very little in terms of hope or discouragement ahead of the next two crucial games of World Cup qualifying. Tesho Akindele’s goal, thanks to a wonderful set-up from Scott Arfield, was clinical. And Akindele put a ball off the bar earlier in the first half, as well.

That was the good.

But, as the game went on, Canada’s attacking intent dwindled. As night set in the Austrian forest that surrounded the playing field (it would be overly generous to use the word “stadium”here), coach Benito Floro brought in a series of defensive-minded substitutions, save for the insertion of Junior Hoilett.

Tosaint Ricketts’s shot that narrowly went over the bar was as close as Canada would come in the second half.

It was almost as if Floro and Canada wanted to show it could hold Azerbaijan to a 1-1 draw, as the opposition drew level early in the second halfafter Karl Ouimette was judged to have fouled an attacker in the penalty area. Dimitrij Nazarov finished off the penalty kick.

The good: Canada scored from open play. Akindele was positive and Arfield is looking more and more comfortable in a Canadian shirt. Julian de Guzman was brought in for a second-half stint, so it looks like the veteran has recovered from the injury he suffered playing for the Ottawa Fury in Edmonton a few weeks ago. (That’s good news for Fury fans, as players eligible for the Amway Canadian Championship will be returned early to their clubs so they can participate in the second legs of their semifinals.)

The bad: Ouimette, who committed the foul that led to the equalizer, also had a shaky moment when he made the poor decision to nod a ball back to keeper Simon Thomas despite the fact an Azerbaijan attacker was streaking into the penalty area. Marcel De Jong had to leave the game with injury — which could be bad news for the Ottawa Fury. And, with de Jong out, that reduces Canada’s already limited roster of fullbacks who actually play fullback with their club teams.

To be fair, a Canadian team that doesn’t start striker Cyle Larin, Hoilett, midfielders Atiba Hutchinson, JDG or Will Johnson (the latter is back with Toronto FC after suffering a hip injury) isn’t really a close facsimile of what Floro will use when Canada plays those oh-so-huge qualifying matches against Honduras and El Salvador at the end of the summer.

So, it’s impossible to grade this game, other than the cool signage for the Kaffeewerk coffee house (I can only imagine it is staffed by four baristas in skin-tight glow-in-the-dark suits). It was another chance for Floro to look at some of the players who might have an impact for Canada in the months and years to come — but can’t really help us get a handle on the immediate future.