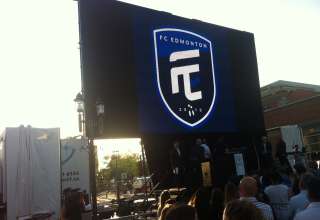 On Friday night, at a street party just a drunken whoop away from the Whyte Avenue strip, FC Edmonton officially became team No. 5 in the Canadian Premier League. A new badge was unveiled. The team’s colours will be two shades of blue and, ahem, “Rabbit White.”

The badge is a stylized, interconnected “FCE.” A rendering of the North Saskatchewan River forms part of the letter E. The badge notes the team was established in 2010 — as a nod to its NASL history — and also had a rabbit-paw track, a more subtle homage to the team’s animal talisman than might have been expected.

(Don’t worry. I’ve been told the rabbit will still have a place under the collar of the team’s jerseys.)

Supporters marched down Whyte Avenue, in a shroud of blue smoke, all the way to the street-party space by the Old Strathcona Farmers’ Market. (See video at the bottom of the post.) When CanPL Commissioner David Clanachan came to the stage, the supporters greeted him with a joking “who are you?” chant.

“This is fantastic,” Clanachan said after attending his fifth team launch over the last couple of month. “I keep saying this, everybody keeps outdoing the other guy. This is unbelievable. If you told me this was going to be like this when I first met you, this is phenomenal.”

“We have joined forces with the Canadian Premier League,” said FCE general manager Jay Ball. “This is changing the culture of soccer across this nation. We’re fueling a movement, it’s the largest sports community across this country, and across this continent, and across this world. Soccer is in our nation’s DNA.”

Now comes the question: Has FCE finalized details on its home stadium? Not quite yet. FCE played NASL games in Clarke Stadium from 2012-17; after the team announced its withdrawal from NASL (which hasn’t played a game in 2018, anyway) it came to the city asking for seating capacity to be raised from 4,100 to 7,000, the ability to be the prime soccer tenant and the chance to have naming rights to the venue.

The move was initially opposed by the CFL’s Edmonton Eskimos, who pay rent to use Clarke as a practice facility, and minor football groups in the city.

But co-owner Tom Fath said that negotiations with the city — and with other partners such as the Eskimos — are going well.

“The process has been positive,” he said. “How many hundreds of stadiums are there in North America where they share the field? We will work out something that’s best for everyone.”

“Edmonton is in good shape,” said Clanachan. “The City has been very positive.”

City councillor Ben Henderson said that council is “supportive” of Edmonton’s move into the CanPL.

“It seemed like a crime to me, if the Canadian League formed, which it now has, that Edmonton wouldn’t be a part of it.”

The name “FC Edmonton” survives, but the rest of the team’s branding is new for the Canadian Premier League. The team that spent 2011-17 in the North American Soccer League is letting the past be the past — save for the fact the old logo will still be used by the FCE Academy.

This was the second CanPL team launch I’ve attended. I was at Cavalry FC’s, but, as you can imagine, Edmonton’s was far more personal. To know that the club is returning in 2019, well, there are a lot of emotions that come to the surface with that one.

As a journalist, I often have to bury my feelings and have a thick skin. When I work with young writers, I tell them to park their feelings and their politics and their opinions. And, I will say this, with over 25 years in this business, there have been many times when I’ve scared myself at how emotionally detached and I can force myself to become, even when dealing with very heated and/or emotional topics.

So, allow me to indulge myself and allow some feelings to bubble to the surface.

When I saw FC Edmonton’s new badge unveiled, with my wife and kids at my side, I thought of the years I’ve spent around this club. I thought of all the players I’ve got to know. When you cover NASL, it wasn’t like doing the NHL circuit; you could get to know guys really well. You got to know their families. You went out for lunch. You didn’t see them simply as strikers or fullbacks or goalkeepers.

So, I thought about the many great people I’ve had the chance to meet and get to know through the years I’ve spent covering FC Edmonton, and, of course, broadcasting matches. From the Fath family to the coaches to the players to, of course, the supporters.

When FCE begins anew I will think of Paul Hamilton’s slide tackles, a 25-yard Shaun Saiko screamer, a bendy Lance Laing free kick. I will think of two Northern Irish friends — Albert Watson and Daryl Fordyce — who took the chance to come to Canada and build new lives for their families. I will think of Eddie Edward prepping himself for what will be a long broadcast career. I will remember John Smits’s first clean sheet, that playoff-clinching header from Paul Craig, and Matt vanOekel deciding he could nutmeg Joe Cole. I will think of Kareem Moses dancing and singing, of Rein Baart defying gravity with a two-footed mid-air lunge.I will remember the Montreal Screwjob and Colin Miller talking about cold, blustery days as “Scottish barbecuing weather.”

As this club moves into the future, may we never forget the past. Don’t forget what it felt like when Shaun Saiko unleashed that laser of a shot for the first FCE goal in NASL play. Don’t forget what it felt like when Michael Nonni blasted a game-winner against the Montreal Impact. The NASL had its warts (heck, that would be an essay unto itself), but don’t ever think that the players dogged it or didn’t care. Despite playing in a league where tomorrow was always uncertain, they didn’t mail it in. They cared.

I guess as long as this site is around, readers can search through the old articles and re-live a lot of those FCE memories. I hope the site continues to be a living, breathing record of a club that, well, has kind of become a family to me.

To all of you, and all the people I’ve missed, thank you. Now let’s get this CanPL thing started. It was only fitting that Tom Fath brought bags of carrots to give to the supporters at the afterparty. Cats may have nine lives. I think rabbits may have more.