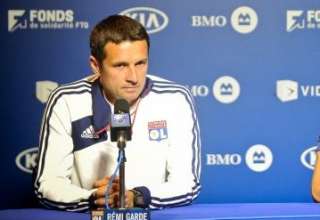 “He’s a proven winner. He’s one of the most decorated players in MLS. He has a game plan he wants to build and he’s not going to take shortcuts in doing it. It’s the type of person that we want.” — Montreal Impact owner Joey Saputo, in August 2011, on the hiring of Jesse Marsch as head coach

“This is the result of a lengthy search process. We wanted to take all the time necessary to ensure we hired the right candidate and it is a process that I do not want to repeat any time soon.” — Joey Saputo, in January 2013, announcing the hire of Marco Schallibaum.

“[Klopas] has been there before,” Saputo said. “He’s had some success at it before, so I see no reason as to changing Frank at this particular point in time. I want to give him the opportunity to build the club that he wants to build.” — Joey Saputo giving coach Frank Klopas a vote of confidence during the 2014 season.

“Mauro has been with us 23 years, For me, there’s no limit when it comes to his role as coach or within this organization. This is not a standard contract – two, three, four, five years, options, etc. I see Mauro as a part of this organization. He’ll have his chance. … We’ll work together to build and keep building. We’ll give him patience and time to put together what he wants to put together.” — Joey Saputo, in November 2015, on the decision to make Mauro Biello the team’s full-time coach.

“We believe Remi Garde’s tremendous experience, his vision and knowledge of the game and his intimate understanding of youth development will give this club a new start at every level.” — Joey Saputo Wednesday afternoon as the team unveiled Remi Garde as the latest head coach.

In 2012, the Montreal Impact hosted Olympique Lyon for a summer friendly. The game was decided in penalties, with the French side getting the decision.
OL’s manager at the time was Remi Garde; the former Arsenal defender/midfielder had taken over the club in 2011 and would remain their until 2014, when he took a break from management for family reasons.

After the game, Garde was pleasant about the experience, stating that North American soccer was coming a long way, he was impressed by the level of play — frankly, the kind of stuff we hear from almost every European or South American club coach after their clubs play friendlies against MLS squads.

Garde won a French Cup with the club, but he couldn’t lift the team to the kind of league successes it had when it dominated Ligue 1 for the first decade of the 21st century. Garde ran the academy at OL before moving to the role as manager. He enjoyed a storied career at the club as a player.

Now, five years and a little bit after that Impact/OL friendly, Garde is back in Montreal, as the new coach of the Montreal Impact. He comes to Montreal after a rather unsuccessful, short term as manager of Aston Villa, a club he couldn’t save from relegation. Aston Villa won just three of 23 games when he was in charge in 2015-16. (Mind you, that Villa squad was so bad, you could have put Jose Mourinho or Alex Ferguson or brought back Gusztav Sebes from the dead and they wouldn’t have done any better.)

Garde has coached in some of Europe’s biggest arenas and a has a great track record when it comes to working with young players. The question, as it is always is with the Impact, is how patient the owner will be when it comes to the coach. Saputo says that he understands that the club will have “a new start at every level.” But that means growing pains. It means displacing old ways of thinking and doing things. And it takes times, heck, years, for a new boss to finally feel like everything at the club is being done as he wants. Is Garde really the face of the new Impact, or is he simply the subject of the annual change-of-coach conference (stay tuned for the 2018 edition)?

When he spoke at Wednesday’s press conference, Garde came off as conciliatory. He said he want to work with the current academy staff, and that, in his words, he’s not going to start a “witch hunt.”