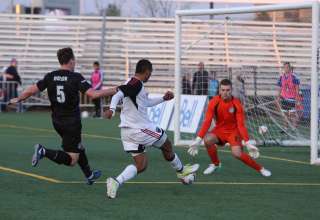 The Ottawa Fury began the process of building (or rebuilding) its roster for the 2018 season, and threw some water on the rumour mill in the process.

On Thursday morning, the team announced that Canadian keeper Callum Irving, local fullback Eddie Edward, Canadian forward Carl Haworth and Steevan Dos Santos, the team’s leading scorer, would all be returning for 2018.  The club announced that Sito Seoane, Sergio Manesio, Azake Luboyera and Jimmy Sanon would also be returning in 2018.

But, for those talking about a Canadian Premier League start in 2018 — and making the assumption that the Fury would or could be part of that — the most important part of the team’s statement is this…  That the players are signed for the “club’s second season in USL.” That means, yes, the Fury have indeed let the world know that USL is where the team will be in 2018.

The team moved from NASL to USL ahead of  the 2017 season, and missed the USL playoffs this season.

“I’m very pleased that we have these eight players returning for next year,” said interim general manager and head coach Julian de Guzman in a release issued by the club. “These players were key components of the foundation we wanted to build last season and will help us take great strides forward in 2018.”