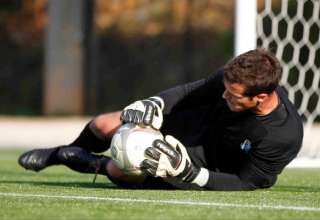 The majority of FC Edmonton’s players and coaches gathered Monday for the team’s first training sessions of the new year. Yes, it’s Oct. 31 and the club, still smarting from the first-round NASL playoff exit, is back on the field.

But keeper Lance Parker wasn’t one of them. He is back in Miami, still working on building up his arm strength and fitness. Parker suffered a compound fracture of his right arm in a game against the Carolina RailHawks on June 11, and he is working one-on-one with a coach down in Florida to get himself back in game shape.

Parker and Canadian keeper David Monsalve will duel it out for the starting job in 2012.

“It’s not completely straight yet, I can’t bend it completely yet,” said Parker. “The training got to the point, where, a couple of weeks ago, I was able to start catching balls again. I can start hitting the ground diving for balls as long as there is no pain — there are still some small fractures in there.”

Parker plans to be back in Edmonton when the team launches its training camp, which is set for January.

“It’s going good at the moment, I am building up a lot of muscle on my arm and getting the range of motion back as well. I never had a cast on the arm, so I was able to move it five days after the injury. The official rehab started a couple of months later, after the stitches came out. By then the arm had atrophied, there was no bicep or tricep anymore.”

Remaining in the Florida heat and humidity will help Parker push himself back into game shape.