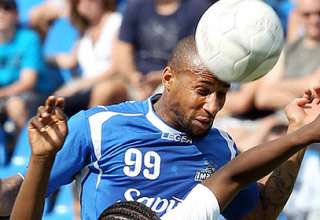 Former Montreal Impact defender Kevin Hatchi launched a new Facebook page on Monday (click here), and one of the first things he posted on it was an FC Edmonton logo.

This will no doubt, to some fans, act as confirmation that the French defender will be signed — or at least given a trial — by Canada’s lone current NASL team. (After putting the FC Edmonton logo up on the page, he then put up a Canadian flag on it, as well).

The club is not confirming that Hatchi is on his way — but the team’s training camp did open Monday. Director of soccer operations Joe Petrone confirmed today that “two or three” of the players cut by the Montreal Impact would likely come in for trial in the coming weeks.

The club will train indoors and bring in trialists — the majority of them Canadians — on 10-day stints. They will be brought in a few at a time so the club can get a good look at them.

Hatchi was released by the Impact 10 games into its final NASL season. He was one of many French imports that the Impact had brought in over the past season and a half — and it looks as if only defender Hassoun Camara will survive to see MLS action.

“We looked thoroughly at the situation before taking this decision,” said Impact sporting director Nick De Santis at the time. “Kevin Hatchi had certain qualities, but he didn’t fit in the group. We took this decision for the well-being of the team. All our players need to walk in the same direction, especially when the team is going through difficult times.